Kate Newby
I can’t nail the days down 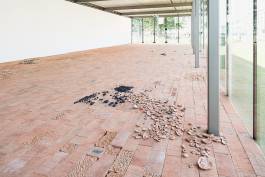 Kunsthalle Wien presented Kate Newby’s first institutional solo exhibition in Austria. The artist’s works are created in response to specific environments and relate to the site and time of their presentation. They bring the outside world into the exhibition space, transcend the spatial limits of the exhibition room, invite viewers to discover what lies outside and to take a fresh look at it.

For her exhibition I can’t nail the days down at Kunsthalle Wien Karlsplatz, Newby has created new installation works that confuse the line between the work and its surroundings. Based on observational research and casual investigations, Newby’s works establish a connection to the built environment as well as to the way the surrounding space is used on a daily basis. In direct confrontation with the architecture of the glass pavilion and incorporating Karlsplatz’ immediate environs, the artist develops discrete works that rely on conventional building materials.

Newby makes use of bricks as artistic material in a newly created large-scale work installed on the floor in the Karlsplatz building, taking up most of the interior space. For this work, the artist modified unfired bricks and inserted found elements: shattered glass pieces left behind as a result of people spending time outdoors in the Karlsplatz area, and bits of clay collected when the subway was constructed. Through the firing process unexpected formations are produced that imprint the inserted pieces of glass and clay. Newby also adds some small, individual ceramic and bronze pieces that turn out—only upon closer inspection—to be handmade objects. The sculpture unfolds as a material texture that invites visitors to step onto the work, to move across the surface and encounter its details. Discreetly integrated into the exhibition space, the artwork allows the incoming natural light to become part of the installation, and its reflection encourages the viewers’ gaze to wander outside.

Outdoors, in continuation of Newby’s work, a depression in the ground has been installed in the adjacent Rosa-Mayreder-Park. It recalls drains that can be found throughout urban spaces. Newby often draws on peculiar architectural features and unobtrusive details, integrating them into her works. Referencing works of land art, a genre that emerged in the US in the 1960s and 1970s, Newby’s minimal as well as radical gestures blend into the existing location, allowing for change over time.

The outside intervention will absorb remains from the world around—debris, leaves, rain water—contingent upon the seasons and every-day activities. In opposition to object-reliant practices, the work integrates itself into the existing environs, becomes part of it and refers to the subjacent operating infrastructure—such as the subway and the sewer system below Karlsplatz—that supports everyday occurrences. By bringing ideas of movements such as land art into an urban context, Newby explores questions of time, place and cohabitation that refer to our contemporary living environment and daily life. Her works capture residues of the passing outside world, which are inscribed in her works and into which her works inscribe themselves. As the vital context in which we live (and which lives with us), the everyday becomes an expression of societal conditions. At once colonized by capitalism (referring to Henri Lefebvre), it is a space of consumption that inhibits real self-expression; and therefore reflects society’s productive forces. Newby’s work engages with and offers a critique of the everyday that adopts non-didactic as well as lyrical forms, creating art relieved from commercial constraints, and coaxing out the poetic quality of the ordinary.

Newby’s art directly involves the viewer. Her works cannot be experienced only by looking, but through a bodily confrontation with them. Kate Newby’s working method draws from situations and experience, intentionally foregrounding a process-based approach. In earlier works, for example, she asked friends to take ceramic stones she had made and to throw them so they skimmed over the water. She also asked them to carry tiny objects in the pockets of their clothing or she installed ceramic wind chimes in remote landscapes, where wind-generated sounds were the only thing that hinted at how to find them. The impressions of their making also often remain visible in Newby’s handmade works, and albeit requiring complex processing procedures, they retain an informal character.

The notions in Newby’s work of the ephemeral and the transiency of things are also reflected in the exhibition’s title I can’t nail the days down. The direct, immediate style of writing of poets of the New York School such as James Schuyler, as well as Alice Notley and Eileen Myles represent an important influence for the working method of the artist.

Kate Newby utilizes the localized details of everyday life to create art that can happen outside but also in relation to contemporary artistic discourse. Her art becomes a participant in a process that is connected to the immediate surroundings and open to transform in the course of time. Considering current modes of production and the expanded field of art, Newby’s works are intimate and immediate engagements with existing sites and everyday encounters.

Kate Newby – I can’t nail the days down

Together with Axel Wieder, Director of Bergen Kunsthall, and Juliane Bischoff, curator of the exhibition, Kate Newby talks about the link between her works presented and the immediate surroundings at Karlsplatz, as well as her penchant to leave the exhibition space. Engagements with urban spaces and establishing ties between the institution and the city is also important in Wieder’s curatorial practice. In the past, Newby and Wieder have collaborated for various projects in public space, 2014 in Bristol and 2017 in Stockholm, both of which dealt with materialized and unnoticed narratives in the cityscape.

Kate Newby. I can’t nail the days down

An eponymous publication accompanies the exhibition.
Christina Barton, Juliane Bischoff, Chris Kraus, and Nicolaus Schafhausen contribute texts to the book that explore the influences, tools, ethical aspects, and poetics of Newby’s artworks, as well as the personal relationships the artist folds into her projects. 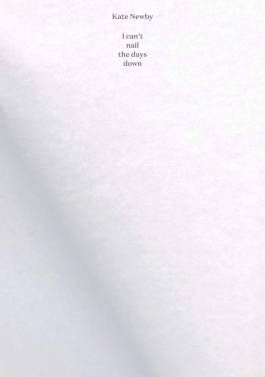 Artist: Kate Newby
(born 1979 in Auckland, New Zealand) lives and works in Auckland and Brooklyn, New York. In 2012 she was awarded the renowned Walter’s Prize. Newby graduated with a Doctor of Fine Arts (2015) from the University of Auckland’s Elam School of Fine Arts. Her solo exhibitions include Swift little verbs pushing the big nouns around, Michael Lett, Auckland (2018); Let me be the wind that pulls your hair, Artpace, San Antonio (2017); The January February March, The Poor Farm, Wisconsin (2016); Two aspirins a vitamin C tablet and some baking soda, Laurel Doody, Los Angeles (2015); I feel like a truck on a wet highway, Lulu, Mexico City (2014); Maybe I won‘t go to sleep at all., La Loge, Brussels (2013); and Let the other thing in, Fogo Island Gallery, Newfoundland (2013); among others. Her works have also been shown in international group exhibitions, including at the 21st Biennale of Sydney (2018); Scrap Metal, Toronto (2017); Index – The Swedish Contemporary Art Foundation, Stockholm (2017); SculptureCenter, New York (2017); Casa del Lago, Mexico City (2015); Auckland Art Gallery Toi o Tamaki, Auckland (2015); and Arnolfini, Bristol (2014).