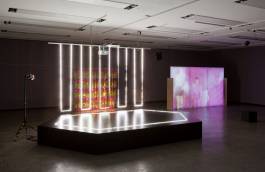 At Kunsthalle Wien, Pauline Boudry and Renate Lorenz presented three video-based works as part of Future Light, the visual art part of the VIENNA BIENNALE 2015. The videos are highly staged scenarios where the past is recreated for a future use and new desires take shape. Amidst glitter, curtains, camouflage patterns, impressive wigs and a certain amount of musical interaction, a form of playful opacity makes itself felt among characters who are deliberately difficult to categorize. Together they make up an atmospheric time-reflective installation, which includes a stage and a series of new sculptures.

Boudry and Lorenz live in Berlin/Vienna and have been working together since 2007. Their recent film installations step in and out of suppressed or illegible moments, staging the actions of individuals and groups living – indeed thriving – in defiance of normality, law and economics. They produce performances for the camera, making use of a dense net of references on experimental film, the history of photography and underground (drag-) performance. The performers are choreographers, artists and musicians.

The most recent work in the exhibition is the 2014 film Opaque, which was recorded in an abandoned swimming pool. The floor of the basin is covered with sand on top of which a series of shiny curtains are placed. Pink and blue smoke envelopes the two protagonists who move around the space dressed in leather, strass and pink camouflage outfits. A playback voice talks about underground people and fugitives ending up here as the result of war, a war with a declared, total and subjected enemy, but an enemy who might “look like me, dress like me and live in place of me”. Do the curtains and fumes grant the “right to opacity” to the bodies that they disguise? Or do they blur the dividing lines between accomplices and enemies? Rather than evoking an atmosphere of threat, the situation seems futuristic and quietly celebratory.

To Valerie Solanas and Marilyn Monroe in Recognition of their Desperation is a filmed social and musical experiment where six performers follow composer Pauline Olivero’s 1970 score, inspired by Solana’s Scum Manifesto. Each performer is asked to choose five pitches and to play long modulated and unmodulated tones, after which they start to imitate each other. Red, yellow and blue light as well as strobe light give cues and as soon as one performer becomes dominant the others try to absorb that dominance. The individual and the collective, giving and taking, unpredictability and protocol, together produce “a continuous circulation of power” (Oliveros). The camera becomes a performer in its own right, following the process in one contiuous take which reveals fetishistic interests along the way. Thus, the artists are asking if sound and light can produce queer relations, suggesting a paradigm for the future.

A punk figure in glitter and a drag queen are the two characters in Toxic. They move around a studio-like space with violet curtains, heaps of glitter and poisonous pot plants on the floor, and projections of images of people wearing peculiar masks from different protest movements, borrowing postures and angles from mug shots and anthropological photography. A number of toxic substances are mentioned – heroin, ecstasy, mushrooms, radioactivity, androgel and testosterone among others – reminding the viewer that toxins can poison you and they can also cure you or improve your life quality. This kind of double-sidedness is repeated in the drag queen quoting Jean Genet in a 1980s interview: to be interviewed in front of a film camera can be as violent as a police interrogation.