How To Live Together 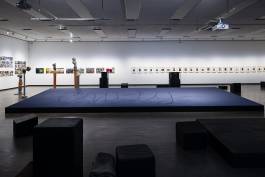 To the Son of Man Who Ate The Scroll, Goshka Macuga’s android addresses the viewers with a direct appeal for humanity. Speaking as though a prophet from the future, the android derives its words from Paul Auster’s novels, Martin Luther King’s speeches, and quotes Hannah Arendt, Friedrich Nietzsche, Judith Butler, and Charlie Chaplin in its call for humanity as the foundation of coexistence. At the same time, it admonishes against humans’ potential for destruction in the manner of an antique aphorism according to which man’s true enemy is man. Goshka Macuga’s humanoid machine evokes the beginning and the end of humanity and appeals to the viewers’ capacity for empathy with its expressions and gestures.

To the Son of Man Who Ate the Scroll sets the scope for the exhibition: it links social analysis with art, connects past utopias to the present and the future, and talks about the fragility of the individual within the societal norms and constraints to which it is subjected, but for which it is also responsible.

How To Live Together deals with the individual and societal conditions as well as potentials for coexistence. The focus of the exhibition is not only on political and economic dynamics, but also on changing social relationships. Inspired by personal experiences, the works by more than thirty international artists of different generations allude to transforming relations between the private and the public sphere, stagnation and acceleration, reality and utopian ideals. The diversity of the living environments and convictions presented show how society is more than the sum of its individuals.

Society Between Erosion and Emergence

How can heterogeneous communities live together in a globalised world? This question concerns our everyday experiences and the current social, economic, and political developments defining them. Old structures disintegrate, perspectives on the past change, and new models for social coexistence evolve. The alleged freedoms that people hold to direct their own lives are determined by their position within societal structures. Realities manifest themselves as social constructions and are proof of the potential of individual actions.

Based on personal experiences, the artworks on display tell stories of flight and migration, inclusion and exclusion, solidarity and participation. Aslan Gaisumov’s works, for example, result from his explorations of the history of his homeland Chechnya. In his video work Volga, he (re)stages his family’s flight during the first Chechen War. The title refers to the means of transportation in which the artist and twenty of his relatives made their escape.

Personal experience also defines Kader Attia’s artistic practice. For him, the concept of “reparation” is an adequate possibility for the re-appropriation of destroyed or forgotten values, whether of a cultural, personal or psychological nature. In his filmic essay Reflecting Memory, he draws parallels between phantom pains and traumata, which allude to the individual as well as the societal body. As a kind of permanent ache, it is passed on from generation to generation and requires conscious remembrance and an active confrontation with the past.

Art can be seen to function as a medium for the reproduction of societal images throughout time as well as provide space for reflection on lived experience. While the concepts of either failed or functioning coexistence are derived from personal experiences, they are also manifestations of structural circumstances.

August Sander’s portraits from the early 20th century represent a wide spectrum of the social and occupational groups of his time. His view on his subjects is characterised by detachment. As evidence of a changing society, his photographs reflect contrasts and connections alike.

His analytical approach is juxtaposed with Tina Barney’s highly personal portrayals of social elites of the 1970s to 2000s. With these photographic reflections on her own background, Barney provides insight into the private sphere of the upper class and its social dynamics.

Paul Graham’s photo series Beyond Caring is also dedicated to specific social groups. In the early 1980s, he documented everyday life at employment offices and social services departments during the Thatcher era – the places where societal, economic, and social inequality are managed. His photographs show rooms with bleak walls illuminated by bright neon light. The complete lack of comfort is a token of the insufficient public interest invested in these rooms. In times of polarised societies, the feeling of nearness conveyed in his works often only exists in precisely defined social confines. In this case, the artistic discourse evolves from a critical distance, but also on an empathic level. Mohammed Bourouissa takes a similar approach in his series Périphérique. His part documentary, partly staged pictures show scenes from the Parisian banlieues, which are largely inhabited by people from the Maghreb states. The fact that disregard for entire social groups is liable to trigger aggression against the even more disadvantaged becomes apparent in both artists’ works.

Recognition, Communication, and Cooperation as a Societal Aim

Acceptance, both on a social and on an institutional level, is the basis of affiliation within our globalised society. In her audio and video works, Cana Bilir-Meier deals with discrimination and the destructive effects that a lack of social recognition can have on individuals within society. Representative of the forgotten stories of migrant workers, Semra Ertan relates the story of the artist’s aunt who burnt herself alive in Hamburg in 1982 to take a stand against prevailing racism. The perspective presented here shows that people can also be turned into foreigners.

Johan Grimonprez’s filmic montage Every Day Words Disappear embeds short excerpts from Jean-Luc Godard’s motion picture Alphaville into a discourse by the American philosopher Michael Hardt about the politics of love as a utopian outlook. For Hardt, “the common” is a means against a society dominated by fear, and an inspiration for a social model that chooses communication and cooperation over power and authority.

As Wolfgang Tillmans proves by his campaigns, art can also provide the means for political involvement. Originally dedicated to the debate on Brexit, his posters mark a countermovement to the polarisations fuelled by the media: positive civil engagement based on solidarity and community gains heightened importance.

The architectural design the Studio Miessen developed for How To Live Together also refers to a society between erosion and emergence. The allusions to ancient meeting places as well as modern building sites symbolise the necessity to rethink the realms of democracy. In this context, the Community College plays an important role as an active place of exchange. Centrally located in the entrance area, the Community College functions as a participatory platform for exploring structures of learning and education, knowledge transfer and the implications politics of affects have for our society.

Complementing the exhibition How To Live Together, the Community College will offer a multifaceted program and an open platform to approach these questions. The program evolves around two central inquiries: If we critically explore the role of education in society, is it a factor of social integration or rather an agent of social division? A second focus attempts to understand affects and feelings as political forces. How do they tie together groups, communities or political movements, or private forms of cohabitation (families, partnerships, friendship), while also fueling radical turnovers.

A series of talks accompanied the exhibition, that can be viewed online.

It's Not New, But It’s Needed

In the last two years, a multitude of art spaces of various kinds have emerged in Vienna, pointing to a shift in the art field from project-based work to the creation of institutions. In addition to new galleries, a variety of self-organized art initiatives have emerged in the city. Based on this shift, the exhibition "How To Live Together" aimed to stimulate a discussion about the current state of the local artistic as well as institutional scene.As an open platform for discussion, "It's Not New, But It’s Needed" addressed the production and presentation of contemporary art in Vienna in order to address challenges of local art organizations, to reflect on different working models as well as on the concrete as well as immaterial value they contribute to the local art field.

Sociologist Kenan Güngör and human rights activist Anetta Kahane discussed the current social situation in Europe and the developments of the past months. The future of democracy will be debated, as well as political representation, recognition as a basis and prerequisite for social cohesion, or the development of a sense of "we" under the current socio-political premises.