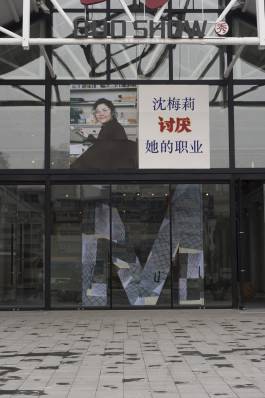 Nether Land is conceived within the framework of the year-long project Morality, a series of exhibitions, events and discursive programs that engages with the contemporary challenges posed by an intense sharing and shifting of values (spiritual, cultural and economic). As the eighth act of Morality, realized specifically for the “world stage” of Shanghai’s Expo, Nether Land highlights diverse international artistic practices that engage with the paradoxes of cross-cultural perception and fantasies of foreign and alternative production.

There is a traditional distinction between the earth as the space of nature, and the world as the space of humanity. Fictions and abstractions belong to the world, as do thought and action. The fable, however, invariably returns to nature in search of motifs that are excluded from the principles and imperatives of morality: animals, plants, inanimate objects. Children are the fable’s ideal audience, and are also exempt from the sphere of morality and moral imperatives, even if only temporarily – that is, for as long as they are children or remain “child-like.” In this sense, that which is excepted from morality is susceptible to becoming an example – a negative example – of the seemingly chaotic and “anarchic” state of nature. Animal behavior, for instance, is often mobilized by moralistic discourses in order to prove that the true nature of humanity is one of uninhibited impulses that morality is designed to set right.

Resonating with the name of the exhibition venue, the Dutch Culture Center, the exhibition title Nether Land is a more exact and deadpan English iteration of the Dutch word for its nation, “Nederland.” The isolation of the word “nether” points to its double meaning, as both low (hence the “Low Countries”) and remote (as in “the nether reaches of the universe”). The echo in Nether Land of the idealized “Neverland” of Peter Pan is not lost, and many of the works in the show explore the idea of a better life elsewhere. More important still is the Chinese translation of the title, He Guo, which emphasizes the questioning tone of the exhibition: 何国 (pronounced He Guo) sounds like the beginning of He Lan [Chinese for “Holland”], it actually means “What Country?” – a question that destabilizes our sense of place and creates something of a parallax effect, where shifting locations and shifting viewpoints contribute to deeper perspective.

Each of the exhibited works in the exhibition projects a different relationship with a far away land – Asia, Africa, Europe and the Middle East – or estranges the here and now, making it impossible for a cumulative portrait of a country or culture to emerge. Nevertheless, the immense impact of such viewing from a distance and across borders on the shaping of aesthetic and political values that underpin contemporary artistic practice in a global arena comes into sharper relief.