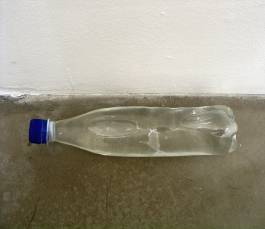 The first major solo exhibition of Berlin-based artist Tue Greenfort, presented at Witte de With, Center for Contemporary Art, Rotterdam. Adopting a cross-disciplinary (at times quasi-scientific) approach, Greenfort works with diverse materials to explore ideas about the environment and recycling. He situates his practice on the blurry boundary between ‘nature’ and ‘culture’ and investigates the ways in which the natural world manifests itself in today’s highly urbanized cities.

With gentle humor, Greenfort uses seemingly simple objects and interventions to reveal the many structures shaping our environment. On several occasions, he has included animals in his work – a pathway for ants leading to a specially-prepared meal (Social Organism, 2001), or a camera triggered by sausages left for foxes (Daimlerstr. 38, 2001) – displaying their ability to act as a metaphor for human society.

Recent projects have explored the way that supposedly public natural resources are commodified and sold. One such example is his Chaudfontaine Condensation Cube (2006), after a work by Hans Haacke, in which Greenfort employs bottled water sold by the Coca Cola company in place of the more neutral tap water used in Haacke’s original. This work reveals the way in which he combines ecological concerns with notions of conceptual art history. In his focus on the flow of materials in the world, and his insistence on working on a small scale while keeping sight of the larger repercussions of our actions, Greenfort’s practice could be seen within the tradition of artists such as Chicago-based Dan Peterman or his English contemporary Simon Starling.

Prior to the opening of his exhibition, Greenfort was spending a month in Rotterdam to create new works inspired by the city and its ecosystems. His research includes a hunt for foreign plants in the industrial harbor under the guidance of the city’s Natural History Museum, discussions with ENECO about switching Witte de With to ‘green’ energy and talks with Roteb about recycling in Rotterdam.

Artist: Tue Greenfort
(born 1973, Holbäk, Denmark) lives and works in Berlin. Recent solo exhibitions include Kunstverein Arnsberg, Palais für Aktuelle Kunst in Glückstadt and Johann König gallery in Berlin (all 2005). This year his work is presented in the group show Don Quijote at Witte de With, in Apocalypse Focus Group at ALP galleri Peter Bergman (Stockholm), in 4 at Anna Helwing Gallery (L.A.) and in the forthcoming Momentum, Nordic Festival of contemporary art (Norway). He completed an ISP residency in Oslo and carried out a commission with London’s RSA Art & Ecology program.

The exhibitions was accompanied by a bi-lingual German/English book featuring images from Greenfort’s exhibition at Witte de With, an interview between the artist and curator Zoë Gray, a newly commissioned essay on the artist’s work by Maria Muhle and extracts from the Danish scientist Jesper Hoffmeyer’s book Signs of Meaning in the Universe, which has greatly influenced Greenfort’s thinking about nature. Co-published by WdW Publishers and Lukas & Sternberg. 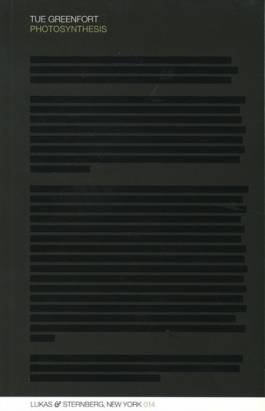