Olaf Nicolai
There Is No Place Before Arrival 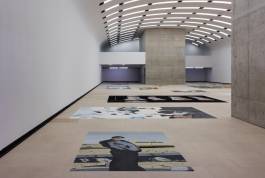 There Is No Place Before Arrival is the title of the multilayered exhibition Kunsthalle Wien dedicates to German artist Olaf Nicolai. Renowned for his inventive work with a diverse array of materials and mediums, over the last twenty-five years Nicolai has conceived conceptual works that are highly complex and poetic. He develops a variety of interdisciplinary projects that address the primary experiences of space, time and corporeality.

Performative elements, works that transform over time, modifications of everyday objects and popular culture icons – as well as a rich field of reference to iconic moments in political and intellectual history – characterize his artistic practice. Employing different media, his practice continually questions our habitual ways of seeing things, reflecting on the ways the connection between meaning and experience constantly takes shape. He does not consider the relation between an art object and a viewer in a linear way but rather as a dynamic process.

“The method” as an artistic approach to work

There Is No Place Before Arrival focuses on issues arising from a particular “method”. This method not only determines the way Nicolai conceives and realizes his work, but also becomes a type of work itself. At Kunsthalle Wien Olaf Nicolai has commissioned several street and theatre painters to paint onto the floor a pool of twenty-two images of different kinds selected from his personal archive of newspaper clippings. The entire space is left empty without any artificial architectural intervention, presenting a gigantic “carpet” of images on which the visitors are able to walk over and around. The constellation of captivating and evocative images with both political and poetic connotations composes a tableau made of diverse sizes and scales. The audience is confronted with something that appears familiar yet it’s not exactly clear what it is. The conceptual gesture of translating photographs from public media sources into enlarged floor paintings is a way to incorporate these particular images into a different context, which affects the perception of them and thus their reception. Over the course of the exhibition, the installation will not only gradually change and slowly vanish, but it will also be activated by writers, dancers, choreographers, musicians, artists and performers invited to respond to this painted plateau and its individual images.

What do we see and how do we see?

Another aspect demonstrating Nicolai’s methodological approach is the way he engages with the context of the presentation of his artwork. In order to reflect on this context and call it into question, the exhibition will continue to take place outside of the institution, and develop in the form of interdisciplinary projects, thereby multiplying the references and interactions the works make with one another and to their environment.

In cooperation with museum in progress, the exhibition will find an extension within media, digital space and Instagram under a project titled media loop (#medialoop). By publishing photographs of the painted images included in the installation in international newspapers and magazines, the imagery will be exposed to a contextual feedback loop.

At the Sigmund Freud Museum Trauer und Melancholie (2009/12) a translation of Freud’s text into Arabic in both written and audio form is on show. The original publication together with a video describing the complexity of the process of translation is displayed and provides a glimpse of the preparations for the reading on the radio.

At ZOOM Children’s Museum Olaf Nicolai realizes a workshop for kids based on the piece A Coloring book for children after motifs by Arnulf Rainer (2002) which is on view. Drawings and collages from a portfolio of Rainer [Proportionsordnungen, 1954] were used to provide templates to be painted out or painted over in the children’s drawing book.

The Antiquariat Georg Fritsch however provides a perfect structure that connects with Olaf Nicolai’s interests in experimental literature and the book as a medium. Nicolai stages an intervention inside the bookshop and the window display, centred around the seminal manifesto Eight Point Proclamation of the Poetic Act written in 1953 by H.C. Artmann.

In 1967 Helene Weigel – actress and wife of Bertolt Brecht – bought a Mercedes-Benz Ponton as Director of the Berliner Ensemble and registered it as a company car. The original vehicle has now been rediscovered and made roadworthy. The Mercedes-Benz Ponton is not a marketing tool or “gag,” but is understood as a venue or actor in public space. The car is a particularly auratic fetish site/space/object. One can almost smell the story that happened in and around the car – especially given the acquisition of the car after the Berlin Wall was built by the GDR. It was literally about a borderline situation of consumption. The car was transported to Vienna and parked in a prominent place near the Viennese Burgtheater and Volkstheater – a kind of return of the Austrian Helene Weigel – recalling the Vienna “Brecht Boycott” (1953–1963), which ended with a performance in 1962/63 at the Volkstheater.

The Deserters’ Monument at Ballhausplatz will be another site for the wide-ranging exhibition activities. Based on a design by Olaf Nicolai and built in 2014, it is a memorial to people persecuted by the Nazis for refusing to serve in the military. Reactivated for the exhibition, the monument will play an essential role in the current project, serving as a venue for vocal performers to perform a cappella pieces. The work is a continuation of Escalier Du Chant realized in 2011 for Munich’s Pinakothek der Moderne. Nicolai commissioned eleven international composers to write songs based on political events that were of current relevance to them. Without prior announcement, the songs were then performed by Stuttgart’s Neue Vocalsolisten on the museum’s central staircase.

There Is No Place Before Arrival

The exhibition title There Is No Place Before Arrival is based on Nicolai’s work Don’t Spend Time Searching the Colorful Layered Flood of Leaking Information, or: There is no place before arrival. It consists of a large stone slab made of Precambrian quartz sandstone that dates back to a time before the first appearance of living things on earth. There Is No Place Before Arrival suggests that when thoughts, words, pictures and gestures are conveyed, they don’t arrive in some pre-existing place as such, but create it upon arrival. At the same time, the title is a poetic paraphrase of the dialectic of desire – “hoped-for duration and permanent delay in motion,” as the artist says, commenting on the title of his Vienna exhibition.

Olaf Nicolai not only discloses his method in There Is No Place Before Arrival. In fact, he will connect performative elements, works that will transform during the course of the exhibition, and motifs from pop culture – all of which will interweave to form a dense web of references alluding to iconic moments in politics and intellectual history. At the same time, the exhibition will stage a set of changing

situations for visitors to explore and experience in a scattered, rather nomadic way as well as by appropriating the works in a very personal manner.

There Is No Place Before Arrival at Kunsthalle Wien will be shown in conjunction with two other exhibitions presented at Kunsthalle Bielefeld (16/6 – 9/9 2018) and at Kunstmuseum St. Gallen (7/7 – 11/11 2018), respectively. Together, the three exhibitions provide an overview of the artist’s multifaceted work and reflect the interdisciplinary concepts he has used over the past twenty years. The focus in Bielefeld is on the museum’s architecture, which was designed by Philipp Johnson, and on themes such as proximity and distance, inclusion and exclusion. For the LOK, the second venue of the Kunstmuseum St. Gallen, the artist designed a walk-through environment that looks like a desert but could also be a lunar landscape. Shifting relationships between the body, space and movement play a key role here, but so (and maybe even primarily) do the effects evoked by these shifts in our imagination. In 2019, the three institutions will collaborate and produce a comprehensive publication.

Olaf Nicolai. There Is No Place Before Arrival

Artist Olaf Nicolai talks to curator Luca Lo Pinto about the ideas behind his exhibition "There Is No Place Before Arrival", the interventions taking place across different venues in Vienna, as well as the “method” that informs his artistic approach.

Artist: Olaf Nicolai
(born 1962) lives and works in Berlin. He studied German language and literature at the Universities of Leipzig, Budapest and Vienna, and has worked as a visual artist since 1990. In addition to participating in many international solo and group exhibitions, he has exhibited at documenta X (1997) and documenta 14 (2017), and at the 49th, 51st and 56th Biennale (2001, 2005 and 2015). For his work In the Woods There Is a Bird..., which was commissioned by documenta 14, Olaf Nicolai was awarded the 2017 Karl Sczuka Prize for works of radio art.

Special thanks to Galerie EIGEN + ART, Leipzig / Berlin for their support to the exhibition