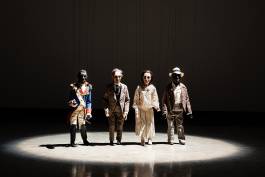 Peter Friedl’s multifaceted works manifest a heterogeneous approach to media and styles. His projects are exemplary suggestions or solutions to aesthetic problems regarding our political and historical consciousness. Looking for new narrative models, they explore both the construction and limitations of representation by applying conceptual strategies such as contextual transfers and reinterpretations of genres from the history of modernity.

The exhibition Teatro at Kunsthalle Wien focuses on a series of recurring themes in Friedl’s oeuvre: model, language, history, translation, theatricality. The centerpiece of the exhibition is the film installation Report (2016), which was first presented at documenta 14 (2017). Based on Kafka’s short story “A Report to an Academy”, Friedl develops both a complex and cinematographically opulent reflection on the interplay between identity and language, as well as assimilation and autonomy, by addressing the self-representational musings of the protagonist ape named Red Peter and his integration into human society.

The cast comprises more than twenty actors who recite excerpts from Kafka’s text, either in their respective first languages or in languages of their choosing (Arabic, Dari, English, French, Greek, Kurdish, Russian, and Kiswahili). Only the original language, Kafka’s Prague German, is missing. The empty stage of the National Theater of Greece in Athens is the setting. Works such as The Dramatist (Black Hamlet, Crazy Henry, Giulia, Toussaint) (2013) and Teatro Popular (2016–17) recall the topos of theatricality, but concentrate on the concept of model. Drawing on traditional forms of puppet theater, both The Dramatist and Teatro Popular may be read as model arrangements for potential counter-narratives to modernity. This links them to Rehousing, a project Friedl started in 2012, which features a series of true-to-scale architectural models of historical structures, in some cases destroyed or never realised. The chosen houses represent living environments as diverse reflections on history, politics, biographies and ideologies; as “case studies for a kind of mental geography relating to an alternative strain of modernity”. (Peter Friedl)

On occasion of the exhibition in Vienna, two new models were created: Winnie and Nelson Mandela’s former home in Soweto, (8115 Vilakazi Street), which has been transformed into a museum, and one of the container-like prefabricated houses that made up Amona – the Israeli outpost in Palestinian territories on the West Bank that was cleared in 2017. The exhibition also features older works such as Dummy (1997), a video work first shown at documenta X, or the long-term project Theory of Justice (1992–2010). Both focus on the problematization of fictions of justice employing very different formal strategies.

In correspondence with more recent works, they not only provide insights into both thematic and formal continuities and changes in Friedl’s oeuvre, but also gain new, often daunting relevance in view of current struggles for distribution and recognition.

Charles Ives' composition "The Unanswered Question," written in 1906, revised in 1930-35, and premiered in 1946, places a string quartet, brass, and a solo trumpet in a question-and-answer situation and serves as the inspiration for an unusual artist talk.
People who have worked with Peter Friedl in the past were asked to submit questions that they had not previously dared to ask, that only surfaced after the exhibition ended, or for which there was never the right opportunity.