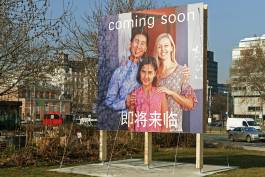 Coming Soon is the title of Ken Lum’s new work, which he realises in the public space at Kunsthalle Wien Karlsplatz. 5m x 4m in size and facing traffic at the busy Karlsplatz, at first glance Coming Soon functions like a commercial advertising billboard – only when one looks closer it becomes recognizable as an artistic intervention. In the manner of advertising campaigns by large mobile telephone providers or for upcoming film premieres, an imminent realization is promised. But the realization of what, one wonders. What is being advertised here?

The billboard depicts the classical constellation of the modern nuclear family: father, mother, child. But the image is in a contemporary formulation that seems to present itself as the perfect product of multiculturalism. As the smallest unit of society, the family has become the object of various transformations during modernity, and thus the focal point of socio-political debates. The slogan “Coming Soon”, integrated by the artist into the image, implies the announcement of a not-so-distant utopia. And thus he gives the image its critical dimension: only superficially does the wording constitute an announcement, and on closer examination it presents criticism of a purely political rhetoric.

Ken Lum works on the boundary between criticism, utopia and affirmation, between concept art, pop art and non-art, and he is no stranger to Vienna, either: In 2000, at the invitation of “museum in progress” he installed the work There is no place like home on the facade of Kunsthalle Wien Karlsplatz. Here too he works with combinations of image and text – this time showing people that lay claim to a home or a homeland in an aggressive to desperate tone. The work was conceived as an answer to the rise of right-wing political parties in Europe, with the local context provided by the election of the conservative/far-right government in Austria.

In 2006, as the winner of an international competition organized by KÖR Kunst im öffentlichen Raum, Ken Lum designed the media installation Pi in the west passageway of the Karlsplatz metro station. In the passageway, which is fully mirrored, statistical data relating to globally or locally relevant themes such as population growth and migration, but also the consumption of schnitzels in Vienna, are constantly updated and displayed. Day after day pedestrians pass the ever- changing arrays of figures. The installation demonstrates Ken Lum’s strategy of superimposing one’s own mirror image and a prosaic description of society through the presentation of data quantities, which are of questionable information value. And it is precisely in the interference patterns between the seemingly authentic but evanescent self-image and the highly coded but equally unfathomable numbers that the fragility of both knowledge systems is revealed.

Ken Lum’s works came to prominence in the 1980s, as part of the “Vancouver School” that grew around artists such as Ian Wallace, Jeff Wall and Rodney Graham. The group adopted a critical attitude trying to reveal the “repressed social content” of conceptual or abstract art by using the medium of photography.

His work comprises a complex repertoire of artistic strategies. Through various methods such as performances in public space, sculptures with borrowed furniture, portrait photography in studio quality to which he adds garish colour codes, lettering and fake logos, through a diverse use of mirrors and in numerous typeface series he shows how identity arises in the superimposition and collision of semiotic systems. His works make reference to a globalization based on economic, cultural and colonial grounds. He employs typography, slogans and motifs to quote from the jargon of advertising statements and their communicative messages, which are aimed chiefly at an urban public. However, part of Ken Lum’s strategy is to confront this impersonal language, aimed at facilitating the global circulation, with the images and inner monologues of individuals who seem to live at the edges and in the niches of this system. By this means he subtly manipulates the mechanisms of the consumer society to make visible the fears and contradictions of a globalized world in which disparate traditions collide.

Talk: Subtly destabilizing the position of...

A discussion accompanying the exhibition can be viewed online.
With Tal Adler, Kerstin Brandes, Ken Lum and Andrea Hubin.

Artist: Ken Lum
born 1956 in Vancouver as the son of Chinese immigrants, is one of the most internationally recognized Canadian artists. He has participated in numerous biennales, including Sydney 1995, São Paulo 1997, Shanghai 2000, Istanbul 2007, Moscow 2011, and at documenta 11 in Kassel. He is Professor and Director of the Fine Arts Undergraduate Program at the University of Pennsylvania School of Design; he lives and works in Philadelphia.