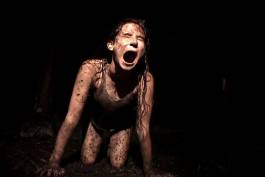 The first solo exhibition in the Netherlands of Chloe Piene, at Witte de With, Center for Contemporary Art, Rotterdam. The exhibition featured a selection of Piene’s recent drawings and videos, highlighting several distinctive aspects of her work, such as the role of sound, the performative nature of drawing, and the interplay of fear and fantasy.

Chloe Piene is known for her intense and powerful work. Since the late 1990s she has been making charcoal drawings of naked figures on paper and vellum, based on images of herself, other people, and, occasionally, animals.

In her videos, Piene twists the cinematic power of sound, voice and narrative. Through the use of simple techniques like the slowing down of the sound and the image, she forces the viewer to engage at a more subversive and dark level. Extreme states such as isolation and fear are enhanced by strong chiaroscuro images, intense soundtracks and solitary performances.

Chloe Piene is part of a generation of young artists investigating new representations of radical otherness. Instead of emphasizing a familiar, modern loss of the self, Piene provokes the viewer to cut loose from any possible illusionary state of mind. In this way, she succeeds in a subtle engagement in the plight of victim and hero, viewer and protagonist.

Artist: Chloe Piene
(born 1972 in Stamford, USA) is a fine artist known for her drawings and video work. Piene was born in the United States. She received her BA in Art History at Columbia University and her MFA in Fine Art from Goldsmiths, University of London.