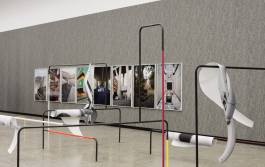 Housing blocks, floating streets, and space age design: post-war urban planning was about more than mere construction. It was concerned with the implementation of a “concrete utopia” featuring the most innovative material of the time. To this day, concrete is perceived as progressive. The exhibition Béton (Concrete) emphasises the perpetually modern aspect of this material, while shining light on the social and ideological implications of past concrete architectures at the same time.

In the 1960s, a style of building evolved which bore a strong relation to the material – so-called Brutalism, named after the French word for raw concrete: béton brut. Brutalist architecture was radical and signified intransigence. The flexibility of the material with its potential for expressive design allowed for an experimental approach and an exploration to the very limits of its inherent possibilities. However concrete is also defined by a significant social element: during late Modernism extensive projects for social structures such as council buildings, educational institutions, and cultural centres were carried out in concrete. After falling into disrepute in the late 1980s, this material is currently experiencing a renaissance: contemporary artists are fascinated by the duality of expressive aesthetics and the “Human Modernism” associated with concrete architecture. Despite the fact that a number of these structures remain only as ruins today – as though testimonials of a failed ideology – they still convey the modernist promise of creating innovative designs for real living conditions. Hence the show takes a retrospective look in order to reactivate the potential of concrete for the future.

Isa Genzken’s sculptures also allude to the significance of concrete construction at a time when it was the material of choice for cultural centres, schools, universities, or public libraries, conveying its connection to diverse communities and fields of knowledge.

Art’s return to the social dimension was already propagated at documenta 8 in 1987. At the time, Olaf Metzel exhibited a work which he has now adapted for the Kunsthalle Wien: a gridded concrete relief seemingly constructed from over-dimensional egg cartons as an ironic adaptation of the designs on department store facades.

For his Brutalist Bulletin Boards from 2001 Tom Burr appropriated the aesthetics of Paul Rudolph’s architecture, one of the protagonists of brutalist construction in the USA. The artist juxtaposed pictures of Jim Morrison with buildings Rudolph created in New Haven. Burr sees an indirect protest against conventions and a subversive contradiction in Rudolph’s adoption of this style of architecture, which, until then, had mainly featured in government buildings and municipal facilities. Morrison, on the other hand, had been arrested for “indecent behaviour” during a concert in New Haven – also an act of rebellion.

Jumana Manna’s sculpture Government Quarter Study is reminiscent of a terrorist act. The three stela installed in the exhibition hall are exact copies of the columns in front of the central building of the government district in Oslo, which was the target of a terrorist attack by the Swedish right-wing extremist Anders Behring Breivik in 2011. The brutalist construction from 1958 was perceived as a symbol of the Scandinavian welfare state and thus, anathema to Breivik’s ideology.

Werner Feiersinger’s series of visionary buildings from the 1950s to the 1970s in Upper Italy deals with architectural photography in the broadest sense. They convey the expressiveness of futurist architecture, which is particularly fascinating today as it shows that sometimes the past can be more radical than the present.

In her video installation Speak2Tweet the Egyptian artist Heba Amin combines shots of unfinished buildings in Cairo with news Egyptians spread via Twitter during the protests against the Mubarak regime in 2011. The modern, but incomplete setting merges with the wishes and hopes expressed online in a construction of urban space which remains an imaginary scenario.

Susanne Kriemann’s installation One Time One Million, on the other hand, consists of a wooden cabinet of wonders with 42 photographs taken with a Hasselblad camera. The artist placed Victor Hasselblad’s photos of migratory birds from the 1930s next to pictures of Swedish council estates, which are mainly inhabited by immigrants today. This work seems to express that the quest for better living conditions is inscribed in the biographies of animals and humans alike.

The work of Ron Terada acts as a satellite for the exhibition in public space: a billboard positioned next to Kunsthalle Wien Karlsplatz presenting the text Concrete Language, which questions the function of language as an objective semiotic system.

For some time now, there has been an increased focus on late modernist urban planning in contemporary art, thus rekindling the euphoria it inspired. Not for nostalgic reasons, but as a reminder that architecture can be more than built-up space. A reconsideration of the aesthetic implications of concrete makes this material the object of a quest for prospective possibilities.

A series of talks and interviews accompanied the exhibition, that can be viewed online.