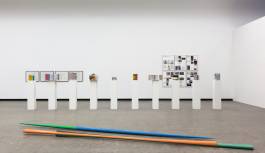 Isa Genzken refers to herself as The Only Female Fool in the self-chosen title of her exhibition at Kunsthalle Wien. This statement characterises the smooth transition between the deep earnestness and the eccentric, overwhelming exuberance, inherent in her work.

Genzken is considered to be one of the most important artists of our time. Although her multifaceted work in essence entails a surprising wealth of ideas, it nevertheless provides for a clear anchorage in the sculptural field. At the centre of the large-scale exhibition in Kunsthalle Wien, is Genzken’s fascination with the urban – that is explored by means of steady recurring themes in her work, such as the mirror motif, and an analysis of architecture as well as the exploration of space as a social sphere. A further focus of the exhibition is Genzken’s artist friends, whose positions she particularly appreciates – a whole lot thereof will hereby be contrasted with Genzken’s own work.

In her work Isa Genzken casts a critical look at the present, and takes this as the starting point for a radical reinvention of reality. Formal rigor is confronted with a playful combination of materials, and the homogeneous with the disparate. However, the diversity of expression is never arbitrary, but corresponds to the dynamics of the city, which on account of its ambivalence still serves as the main source of inspiration for Genzken. The classical rigor of modern architecture, the post-modern fascination with the trivial and the motley combination of vastly different styles in the real urban space, constitutes the raw material of her sculptures and assemblages, collages and films. Her exploration of architecture is always accompanied by reflections on the social as lived space. Genzken’s Social Facades (2002) with her reflective surfaces, are reminiscent of the reflective surfaces of corporate buildings, however they also distort our own image, which is thereby reflected in the shimmering and reflective sheets from the DIY store that are pasted with image objects. Isa Genzken’s New Buildings for Berlin (2014) are euphoric, utopian designs that challenge the real erected conformity tristesse, with regard to how great contemporary building could look. The Beach Huts, ten objects from the year 2000, in which the boundaries between public and private spheres seem to blur, celebrate the improvised temporary dwelling, as another place of longing. Science Fiction/Hier und jetzt zufrieden sein (2001), which was jointly designed with Wolfgang Tillmans, forms with its large reflective cubes, a resonator that duplicates the environment and suggestively draws the viewer in the abstract space of pictorial illusion.

The American author Joshua Decter wrote in his contribution to the catalogue, which is published under the title Cities Run Through Her Veins: “She seems to have an intuitive grasp of cities as territories of wonder, complexity, fear and hope ... For decades, Genzken has conveyed a fascination with the urban – embracing the events, velocities, identities, structures, beings, temporalities, violence, beauty, ugliness, strife, serenity, melancholia, fugitive subjectivities, psychologies and places that surface and recede within city-space.”

Isa Genzken shares this exploration of contradictions of urban life and the inherent potential for social change with artists such as Gordon Matta-Clark and Dan Graham. In I’m Isa Genzken, The Only Female Fool, selected works of both artists will for the first time be showcased in a dialogue, which is intended to focus on the parallels in their explorations of the urban space as a particular area of economic interests. In addition, works by Gerhard Richter, Carl Andre, Jasper Johns, Wolfgang Tillmans and Lawrence Weiner will be presented. The direct collaboration with Tillmans moreover also led to the series of photographs Atelier (1993), portraits of Genzken in the Cologne Cathedral – a further ambivalently thematised architecture.

The presentation at Kunsthalle Wien Museumsquartier, entangles these different perspectives, and thereby enables them to enter into a dialogue. This new œuvre on Genzken that is as diverse and consistent as her past work, moreover arises out of and in confrontation, with heterogeneous as well as harmonizing works, on material and thematization.

I’m Isa Genzken, The Only Female Fool also interconnects the two sites of Kunsthalle Wien: Haare wachsen wie sie wollen comprises a collection of bamboo shoots that widely visible proliferate like hair from the rooftop of the Kunsthalle Wien Karlsplatz. Genzken sees sculptures as objects that are charged with content and through their placement in indoor and outdoor spaces establish a constant relationship with these spaces, thus providing a dialogue with the respective architecture and its social as well as ideological charge. The unruly hair becomes a plea for the proliferations of the urbane, which have become a defiant reaction to the universally increasing endeavours of conformity.

Isa Genzken's longtime gallerist Daniel Buchholz and Nicolaus Schafhausen talk about their personal approach to the artist's work and its development over the past decades.

Writer and critic Jennifer Kabat introduces the work of Isa Genzken, particularly with regard to its relation to architecture.

Artist: Isa Genzken
(born 1948) lives and works in Berlin. An acclaimed retrospective of her work was exhibited at the MoMA in New York, up to March 2014. In Vienna, Genzken was showcased with solo exhibitions at Generali Foundation, in 1996 and at Secession, in 2006. An exhibition of her work, curated by Nicolaus Schafhausen was showcased in the German Pavilion at the Venice Biennale, in 2007.

The publication accompanies the exhibition including a foreword by Nicolaus Schafhausen, essays by Joshua Decter and Tom McDonough, and installation views of the exhibition.
Edited by Kunsthalle Wien and published by Sternberg Press. 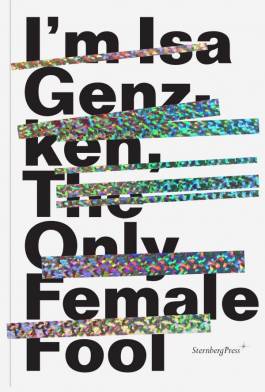