Pierre Bismuth
The Curator, the Lawyer and the Psychoanalyst 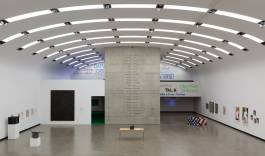 “I just don’t like art that tries to take you somewhere else. I have a problem with art that aims at providing entertainment and dreams. People don’t need art to dream. Everyone is dreaming already. Everyone is already creative. The artist doesn’t have the exclusivity of being creative in society.” (Pierre Bismuth)

The Curator, the Lawyer and the Psychoanalyst is the title of the first major exhibition taking in the broad oeuvre of French artist Pierre Bismuth. Around sixty works created between 1988 and 2014, as well as a new work that Bismuth has developed specifically for this presentation at Kunsthalle Wien, offered a representative survey of his complex output, which encompasses all manner of media.

Bismuth often acts to sabotage the system of art by undermining its established meanings and perceptions. Authorship and originality land on his dissecting table. In doing so, Bismuth is fond of carrying out his ironically sharp slices at periodic intervals, with most of his works being serial in nature.

One of the artist’s best-known series, Following the right hand of..., was begun back in 1998 and has been added to ever since. In these works, Bismuth traces hand motions of famous artists and important personalities such as Sigmund Freud, Greta Garbo, and Pablo Picasso using documentaries and feature films, with a foil spread across the screen on which they are played. The overall series of works – which was originally born out of boredom, Bismuth says – not only pokes fun at the way in which iconic artists are reduced to their handwriting, but also transforms the passive experience of movie-watching into a productive act of translation, repetition, and reflective perception.

A different sort of translation provides the basis for The Jungle Book Project from 2002. This video work, accompanied by 19 drawings, makes a theme of language as a medium in its employment of the famous animated movie by Walt Disney. Bismuth uses a large number of non-English dubbed versions of Disney’s The Jungle Book to assign each character a different language, playing ironically with national clichés and stereotypes and ultimately resulting in a schizophrenic, wild, zoo-like ensemble, a Babylonian confusion of tongues in the midst of a cartoon jungle.

Pierre Bismuth considers his artistic practice a tool for examining how we perceive reality. By altering regulating systems of signs and injecting uncertainty into seemingly defined situations, he both seriously and playfully questions established rules of perception while making the observer conscious of concealed or previously unnoticed elements of reality.

Musings on the topic of audiovisual perception also provide the backdrop for The Party (1997), for which Bismuth likewise made use of another artist’s work – in this case, it was that of film director Blake Edwards. Bismuth hired a stenotypist to listen to the soundtrack of Edwards’s comedy The Party (1968) and describe the dialogs as well as the atmosphere and the plot without actually having seen the movie itself. The final outcome of this process is a double-projection that juxtaposes the video image and the text. The movie is shown without its sound on a monitor, with the text simultaneously projected as divergent subtitling that provides a form of abstract commentary. With this double act of translation – from film to sound and from sound to text – the artist generates a new scenario from the collision of different media. The three work series Certificate of Authenticity, Most Wanted Men, and illem, Robert Fu and Myself, on the other hand, parody both the cult of genius and the authorship-theme that is so often the object of heated discussion in the art world.

For the exhibition Bismuth has developed a new work titled Fried Chicken Flavored Polyethylene which consists in the creation of a new molecule of polymere presented in the form of plastic bids, which are produced by an extruding machine. In the exhibition space Bismuth showed the origin and the result of his experiment hiding the process. The plastic polymer was presented alongside the tools used to produce it (an extruding machine, artificial flavor, polyethylene). This work visualises the very process of transformation by fanning it out into its constituent parts.

Pierre Bismuth was currently working on his first feature film entitled Where is Rocky II?, which he planned to fund in part through crowdfunding. The trailer for the film, created in 2013, can be seen in the exhibition and the fundraising itself forms part of the artistic concept behind the film, which in turn is based on a work by Ed Ruscha.

In keeping with Pierre Bismuth’s habit of using individual works and series to critically scrutinise the methods and conventions of the system that is the art business, Der Kurator, der Anwalt und der Psychoanalytiker sees him turn the very act of selection into a conceptual gesture. Bismuth asked three individuals with differing backgrounds – a curator (Luca Lo Pinto), a lawyer (Laurent Caretto), and a psychoanalyst (Angel Enciso) – to each select a certain number of works from his oeuvre and write a brief text explaining the choices made. The texts thus written replace the work-focussed essays that one commonly encounters at exhibitions. With this revised process, the artist seeks to question not only the roles of artists and curators, but also the typical curatorial scenario as such.

A great deal of Bismuth’s output takes artworks or images and artefacts of popular culture as points of departure, altering their data and presenting them in a way that does not allow for easy reading, since the original information has been corrupted. Hence, they look familiar and are yet distinct from that which we already know, while being accessible yet complex in their meaning.

By using the entire exhibition at Kunsthalle Wien as a medium, Bismuth extended his conceptual gesture to other elements associated with the presentation such as accompanying publications and publicity. His poster campaign for the exhibition, for example, was adapted at various public locations around Vienna to show three new works belonging to Performances, his ongoing series of text-based works. The scenarios described by this series can be distinguished only with difficulty from the ordinary activities of passers-by in the public space.

Pierre Bismuth. Things I Remember I Have Done, But Don’t Remember Why I Did Them 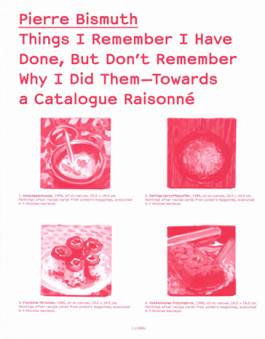