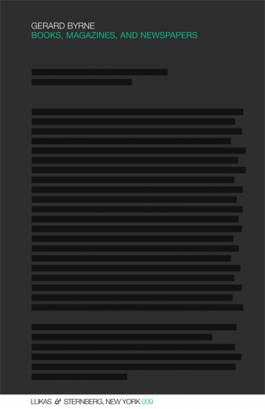 Irish artist Gerard Byrne (*1969) focuses on the way photography and film have influenced visual culture in the twentieth century. Byrne’s conceptually based photos and videos explore the genealogies underlying each picture, the different frames which guide its perception, as well as the references in which a mediated image evolves.

Demonstrating a wide-ranging engagement with quotation and citation, the work seizes upon mass-media forms that were never intended to serve as “models,” but now have become such.

George Baker has written a theoretical essay where he links Byrne’s work to theater and notes that the presence of avant-garde dramatist Bertolt Brecht has never been less discussed, but more widely explored, than in the last decade of artistic practice. The author traces “a set of provisional conjectures about the ‘underground connection’ of ... contemporary art to the present forms of capitalist crisis. They are new forms on both sides—the crises and transformations of both capitalism and culture—and more than ever before they demand critical elucidation alongside one another.”

George Baker is an assistant professor of art history at UCLA, a long-standing critic for Artforum and an editor of OCTOBER  and OCTOBER Books.