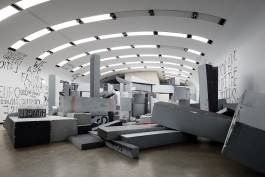 For many years Gelatin and Liam Gillick have discussed how to work together. The result is the exhibition Stinking Dawn: the production of a full length feature film at Kunsthalle Wien. The concept, script and staging have been developed in a constant exchange between the artists. The film will examine the limits of human tolerance in the face of oppression, political crisis and excessive self-delusion. It follows the destiny of four privileged young people who grow up at a time of crisis and move through various stages of development and self-reflection towards a final moment of collapse.

During the shooting period (July 4–13), the artists will be joined by many artist friends and long term collaborators. All visitors to the exhibition will be potential extras inside a sprawling modifiable stage setting—a monumental faux-stone toyblock architecture of colonnades, amphitheaters, night-club interiors, and a prison.

The protagonists personify “pathetic young snobs” who try to keep afloat in what already could only be called post-leftism. What initially sounds like the realization of a socialist pipe dream quickly turns into a sophisticated interrogation of ideals and values that are being eroded before our eyes by the contemporary “post-utopian situation”—a very real set of fears, envy, and conformism fanned by the “neoliberal counter-reformation.”

The movie script is in part based on Vivre et penser comme des porcs. De l’incitation à l’envie et à l’ennui dans les démocraties-marchés, a book published in 1998 by the French philosopher and mathematician Gilles Châtelet (the English translation was released in 2014 as To Live and Think Like Pigs—The Incitement of Envy and Boredom in Market Democracies). The titular “pig” is the neoliberal egomaniac whose desires, strategies, and projects serve a single objective: to increase the productivity and profitability of his own human capital.

Both Gillick’s and Gelatin’s art is informed by a distaste for the demonstrative exercise of authority in any form, and since the 1990s, they have sought to realize their projects in ways that chart a genuinely novel alternative to hierarchical power structures. A key strategy in this context has been working with other producers; what sociologists call parallel play. Stinking Dawn is a case in point: the project grew out of long conversations between the artists that began in the early 2000s.

After shooting in July, the artists will move to the studio for the film’s postproduction. The exhibition for the remaining duration shows the looming grey and graffitied remnants of the production. A large slideshow of photographs is projected within the monumental setting providing insights on the filming process. Musical instruments in the space haphazardly play while visitors are able to walk among the tattered sculptural traces of the scenery that gave the film its peculiarly striking mise-en-scène. The “end” of the presentation will at once be a prelude to the film’s premiere, to be held in the fall of 2019 at an as yet unspecified venue outside Kunsthalle Wien.

There are four kinds of silence: Literal, allegorical, moral, divine.
And putting all four together is difficult, almost impossible.
And then, there is harmony.
And this happens a few times in a lifetime, then you die.
This is very important.
(from: Liam Gillick, script for Stinking Dawn, 2019)

Arstists:
Gelatin
Gelatin are four Vienna-based artists. They first met in 1978, when they all attended a summer camp and have been working and playing together ever since. They began exhibiting internationally in 1993. Gelatin’s practice incorporates the codes of relational aesthetics, their invented sculptural language and approach that is anarchic and irreverent. Humour and logic, as well as chaotic precision, are key instruments in the conception of new works. Their art draws a line from the insular and individual to the open-ended and collective, from the overtly erotic to the sublimated joy of togetherness. Often museum visitors become part of their performances, which aim at transforming the audience into a community. Gelatin has exhibited internationally in institutions including the Museum Boijmans van Beuningen, Rotterdam; the Fondazione Prada, Milan; the Musée d’Art Moderne de la Ville de Paris; Kunsthaus Bregenz; Kunsthalle Krems; and the 21er Haus, Vienna. Their work was included in Manifesta 11 in Zurich, the 49th and 54th Venice Biennale, the 1st Moscow Biennale, the Aichi Triennale, the Gwangju Biennale, the Shanghai Biennale, the Liverpool Biennial and EXPO 2000. Based in New York,

Liam Gillick
(born Aylesbury, UK, 1964) deploys multiple forms to expose the new ideological control systems that emerged at the beginning of the 1990s. He has developed a number of key narratives that often form the engine for a body of work. Gillick’s work exposes the dysfunctional aspects of a modernist legacy in terms of abstraction and architecture when framed within a globalised, neo-liberal consensus. His work has been included in documenta and the Venice, Berlin and Istanbul Biennales; he represented Germany in Venice in 2009. Solo museum exhibitions have taken place at the Museum of Contemporary Art in Chicago, the MoMA in New York and the Tate in London. Over the last twenty-five years, Gillick has also been a prolific writer and critic of contemporary art. He is the author of a number of books including a volume of his selected critical writing. He has also realised high-profile public projects including the British Government Home Office building in London and the Lufthansa Headquarters in Frankfurt. Throughout this time Gillick has extended his practice into experimental venues and collaborative projects with artists including Philippe Parreno, Lawrence Weiner and Louise Lawler.