Marcel Odenbach
Even If The Driver May Be Different, The Truck Still Remains The Same 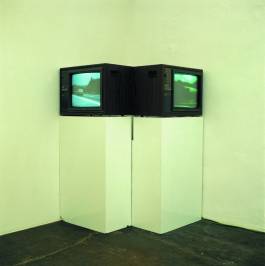 For Marcel Odenbach video is not a medium offering a possibility to create new images, but rather a medium to rework existing images. The film materials he uses are emblematic images loaded with symbols. The images for the viewer familiar with the media stand for historical events or social problems.

Odenbach uses film cuts and techniques of dissolving and comparing images to produce an associative construction of descriptive or conflicting images which place familiar topics in new contexts and thus allow for discussion. The spatial arrangement of the film fragments integrate and challenge the viewer’s own stance.

The exhibition Auch wenn der Fahrer ein anderer ist, der Lastwagen bleibt der Gleiche (= Even when the driver is another, the truck remains the same) was created together in close collaboration with the artist and will present altogether eight installations and a selection of videos.The exhibition will present an overview of Marcel Odenbach’s work up to the present with work from the early 70s and into the 90s up until now.

Besides being retrospective, the exhibition focuses on certain topics. Two persisting complex issues in Marcel Odenbach’s works are Germany and its history before and after reunification and the issues of migration and minorities. The connection can be made between the consequences of the aftermath of the German trauma like the holocaust, terrorism, or the dividing of Germany and with questions of dealing German identity. Similarly, the connection can be made between placing of images from African countries and the United States in collage form behind superficial images from the media and evokes motives like escapism and oppression. The artistic combination of images from the media exposes them as a part of the complex “truth”. Odenbach integrates himself and his biography in many of his works.

Through the spatial confrontation with the installations, the meaning of the individual’s subjective participation in the construction of collective consciousness is conveyed. “Germany” and “minority” as important aspects of Marcel Odenbach’s works are implied with the title of the exhibition. “Even if the driver may be different, the truck remains the same” is the refrain in a song sung in an African country after an election was then immediately forbidden. This also characterizes the current political atmosphere in Germany.

Artist: Marcel Odenbach
(born 1953, Cologne) Between 1974–79 he studied architecture, art history and semiotics at the Technical University, Aachen. Since 1976 he has been working with various media including video, tape, installation, drawing, and performance. Since 1992–97 he was professor for Media Art at the State University of Design, Karlsruhe, and from 2001–2010 at the College of Media Arts, Cologne. Since 2010 he has been a professor at the Art Academy Düsseldorf. Solo exhibitions: Tel Aviv Museum of Art; Kunstmuseum Bonn; Frankfurter Kunstverein; Museo de Arte Contemporáneo de Caracas; International travelling exhibition organized by the Institut für Auslandsbeziehungen e.V. (ifa), Stuttgart; Collection Friedrichshof, Zurndor; Freud Museum, London; Hamburger Bahnhof – Museum für Gegenwart, Berlin Marcel Odenbach lives and works in Cologne and Berlin.

The Museum für Moderne Kunst provides an addition to the exhibition in the Kunstverein Frankfurt.
The installation “Ach wie gut, dass niemand weiß” from Marcel Odenbach, on September 15th 2002.

On the occasion of the exhibition, the publication Blenden/Blinds was published in cooperation with the Museum für Moderne Kunst, Frankfurt am Main and Kunstraum Innsbruck. With texts by Dan Cameron, Jörg Heiser, Kobena Mercer, Vanessa Joan Müller, Marcel Odenbach, Nicolaus Schafhausen and Astrid Wege. 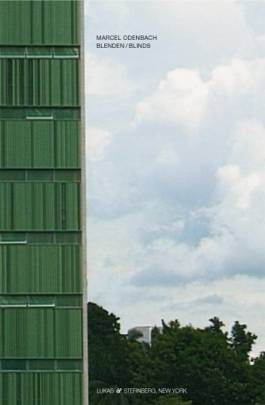