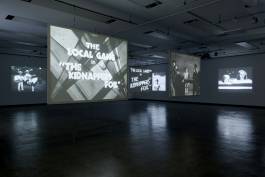 Kidnappers Foil is both the title of an exhibition by artist Gareth Long and the title of more than 200 films by American filmmaker Melton Barker. From the mid-1930s into the early 1970s Barker ventured around the USA making the same film over and over. Most prints of these films no longer exist, but around fourteen have been preserved and Gareth Long assembled and screened them for the first time since the films were made at Kunsthalle Wien.

The films were projected on separate screens together in one gallery space so that viewers can see across the multiple iterations at one time. Speakers were used for the sound elements, allowing the sounds of the films to bleed into one another, dissolving the boundaries between each film. With this kind of presentation Gareth Long reflects on the topic of amateurism, questions the relationship between originality and seriality and visibly stages the tension between repetition and difference.

The Kidnappers Foil films are also a series of historic documents that give an intriguing insight into the aesthetic, social and technical structure of the United States around the mid of the 20th century. For around four decades filmmaker Melton Barker travelled around the USA shooting the same film in town after town featuring local children acting: same script, same story, same title.
Kidnappers Foil tells the story of a young girl who gets kidnapped from her birthday party and is eventually rescued by a search party of local kids. After the rescue, the relieved townsfolk celebrate with a party in which the budding stars showcase their musical talents.

Melton Barker recognised that many people enjoyed seeing themselves, their children and their communities on film. Enlisting local movie theatres and newspapers to sponsor and promote the productions, Barker auditioned children and offered “acting lessons” to the most promising for a fee of a few dollars. He then assembled 50 to 75 would-be Shirley Temples and Jackie Coopers, aged three to twelve years old to act out Kidnappers Foil. A few weeks after filming, the town would screen the fifteen to twenty-minute picture to the delight of the local audience.

Multiple versions of early short films were sometimes made, due to one filmmaker effectively remaking another’s film or often as the result of competing film distribution companies making straight duplicates of films. As an example of
a filmmaker making multiple different versions of the same story, and as such obliterating the notion of a locatable ‘original’, Kidnappers Foil introduces a wholly other kind of copying.
The films were not remade as a formal or conceptual strategy, but largely as the result of a money making scheme on Barker’s part, playing on the participants’ desire for visibility.

The films also offer a glimpse into a particular moment in media history. New media culture is often characterised as demonstrating an increased amount of amateur production and participation. Today one can point a digital camera at oneself and be seen within seconds by millions on Youtube or Instagram, and the desire to constantly film and photograph oneself for public presentation is a salient preoccupation of our present time. By featuring an all-local and decidedly amateur cast, these films excavate a pre-history of this contemporary situation. The narcissistic impulse to see oneself on screen, and the possibility of being recognised and potentially becoming famous (even if only for 15 seconds rather than for 15 minutes), is central to Kidnappers Foil. The films gave children from rural communities that once-in-a-lifetime chance to star in a film. And even if they weren’t ‘discovered’, there was a certain satisfaction about being seen in and by their own communities. 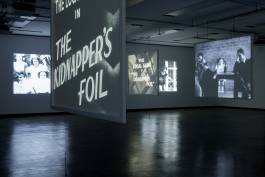 The exhibition can be viewed online.

Melton Barker (raised in Dallas/Texas) was a more or less unknow American filmmaker. Both the year of his birth and the year of his death is not known. Information about his life and work remain largely in the dark. The film series The Kidnappers Foil was included in the historic collection of library of congress, Washington in 2013.