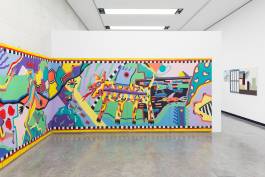 BIG OBJECTS NOT ALWAYS SILENT is the telling title for Nathalie Du Pasquier’s first solo-exhibition in Austria. Covering an artistic career spanning 35 years, the exhibition brings together her paintings and patterns, sculptures and designs, constructions, carpets, and ceramics to create a world of different cities, of architectures and forms that fall under one roof to build a new understanding of how her practice has evolved.

Larger than life, her work looks at the trope of the still life in an entirely fresh and individual way. The exhibition enters new terrain to see and understand how Du Pasquier considers and plays with complex arrangements of forms, the expressive and emotive relations between things, and the space between objects and their representation.

Working between the fields of fine arts, design and craft, she repeatedly breaks the “rules” and confines of genre. Whether her still lifes take shape as paintings, or as sculptural objects, design objects, furniture, carpets, or models; “they portray a relationship between forms”, Du Pasquier explains. For her the decorated surface offers incredible potential for illusion, allowing one to fall into another dimension.

Self-taught, Nathalie Du Pasquier began her career in textile design. At the age of 23, she was the youngest founding member of Memphis, the influential Milanese design and architecture collective launched under the direction of Ettore Sottsass in 1980. “Form follows fun” was the motto of this new, revolutionary style of design geared towards sensuality and emotion. The explosion of colours, shapes, and patterns ran counter to “form follows function”, the academic and intellectual credo of modern architecture and design.

Since 1987 however, her main focus and passion has been to paint. Although she primarily sees herself as a visual artist, her measured approach to formal attributions lies not only with regard to her own work, but also to hierarchies within artistic fields: “What bores me about the art world is the myth that art is so precious, and that it should be so expensive. Art is just what you do. It is not less worthwhile to make a pattern or a carpet than a painting in the end.”

Regardless of category, Nathalie Du Pasquier’s works always bear her distinct and unmistakable hallmark. Her travels to the African continent during her early youth, the ornamentation of the Wiener Werkstätte, Le Corbusier’s and Amédée Ozenfant’s artistic production, and Novecento painting by Giorgio de Chirico and Giorgio Morandi all had an impact on her creative approach. When asked about her method and the traces of the diverse influences in her work she explains: “adventures are like that: you follow tracks, you don’t follow ideologies.”

BIG OBJECTS NOT ALWAYS SILENT averts a chronological framework and instead opts for an intuitive choreography, a constructed environment similar to the way in which the artist creates her painterly or sculptural compositions, a methodical yet free, lyrical procedure. As conceived by Du Pasquier, pieces from decidedly different periods of artistic production are presented side by side, portraying the natural evolution and exchange between design and painting, as well as illustrating recurring elements and processes of making that ultimately underscore all of her oeuvre. Functioning as a type of alphabet, her work is constantly enriched by new objects and signs, following a peculiar yet powerful path to construct and compose forms, sculpt space, and render representation anew.

On entering the exhibition the horizon of a shelf stretches out before you acting as both a stylistic prelude of influences, and as a self-portrait of the artist – an eclectic, aesthetic and material biography of her intellectual world. The installation is composed of a host of distinct elements: stones have been placed next to vases, tools, and abstract pieces of coloured wood, and sculptures en miniature can be found next to small drawings and paintings by the artist. This juxtaposition of artworks and mundane objects merges in a tableau of imagination, exhibiting the foundations for Nathalie Du Pasquier’s work.

The division of different rooms, considered as houses or cities of intrigue, constitute the central exhibition space. In each of these rooms creative phases are presented in a wild jumble of chronologies, materials, and motifs. The dynamics of geometry unfold on perceiving the interrelations between the items: sculptural objects that resemble architectonic models are paired with paintings of sculptures; coloured elements stand out axonometrically in metaphysical, monochrome landscapes. Flat, two-dimensional objects cut out of painted paper or cardboard alternate with small, decorative three-dimensional constructions. These enigmatic juxtapositions manifest as a trompe-l’oeil, tricking the eye they recall objects from Du Pasquier’s design period. Monochrome drawings, graphic works, and furniture dating back to the artist’s time at Memphis support this theory – a delicate synthesis of work manifests itself, her unique practice is a product of experiments drawing from the perspective of painting.

The exhibition at Kunsthalle Wien is the first extensive solo show dedicated to Nathalie Du Pasquier at an international institution, and is thus a long overdue homage to her oeuvre in all its genre-spanning complexity.

A two-volume publication on the occasion of the exhibition. It consists of an artist’s book designed by Nathalie Du Pasquier and another volume with an extensive conversation with the curator, short essays by a number of contributors and a wide documentation of the exhibition and the works included. Published by Sternberg Press. 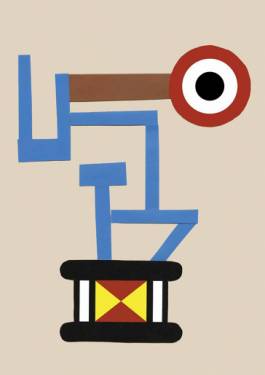