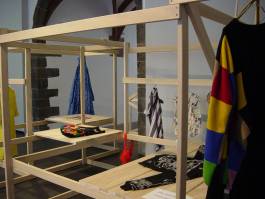 The exhibition Moderne Mode provides an exemplary look at the interweaving of art and fashion with a focus on the work of Bernhard Willhelm (*1972), one of the world’s foremost innovative designers, who studied in Antwerp at the Royal Academy of Fine Arts and is now working in Paris.

Bernhard Willhelm’s designs refuse a simple classification. They allude to the ostensibly familiar, detaching it from its classical functionality and giving it a new role. What’s more, his collections, unlike those of the other stars in the international designer scene, also have something distinctly German about them. Willhelm, a native of Ulm, Germany, draws consciously on his country’s traditional clothing style, letting himself be inspired by traditional costumes, knitted and crocheted ornaments, which he reiterates and deconstructs in his work. The result of this unconventional approach to the repertoire of the otherwise everyday style of dress is clothing that pushes the limits of what can be worn, yet doesn’t overstep them, and, in so doing, invents new body images. This exhibition presents a selection of Bernhard Willhelm’s designs, fashion photographs, magazines, catwalk scenarios, and a glimpse at the artistic milieu in which Willhelm operates. 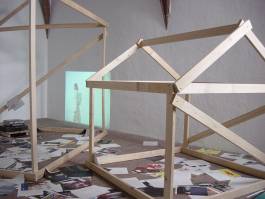