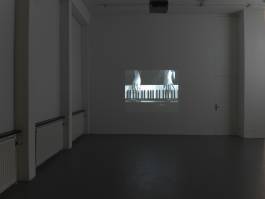 Power Alone is Act V of the year-long program Morality at Witte de With. Like Act IV.
The group exhibition starts from the premise that power operates and is made tangible in the encounter between the general (society, morality, history, gender) and the particular (the individual). Power, as we understand it today, is the moment in which the individual experiences the process of becoming a subject, a member of her or his society through encounters with others and with the law.

As power is something that is experienced, it has no aesthetic value in the traditional sense; it is, however, integral to what Jacques Rancière calls “the distribution of the sensible”. This is one way in which this exhibition engages with the notion of power.

But Power Alone also proposes a more fictive narrative, linked to the myth of Narcissus, a myth that perhaps represents the desire inherent in the discourses on power. Like Narcissus, the Greek hero renowned for his beauty and for his cruelty towards those who love him, the abstract notion we call power would be condemned to become infatuated with itself, perishing by love with its own semblance. Taking Narcissus as the personification of power, this exhibition presents a series of hypothetical scenarios on power's withdrawal from class, gender, race and its inscription in two opposing forms: the individuated body and the mythological world. The works included engage with the cleft between power as a general force and solitude as a state of mind, between power as the name we give to structures that regulate our everyday lives, and individuated encounters with these structures. The exhibition presents a number of different guises and forms of power, from concrete to abstract, in the socially conditioned world. as in Canan enol's Exemplary or Mark Boulos' All that is Solid Melts into Air. Works such as Goshka Macuga's On The Nature of the Beast tease power relations out of specific situations; whilst , Miki Kratsman's photographs, Ziad Antar's videos, or Luc Tuymans' paintings indicate spaces that can no longer be experienced outside of the structures of power.