Saâdane Afif
This Is Ornamental 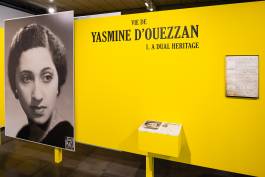 Work by the French artist Saâdane Afif was included in several group exhibitions at Kunsthalle Wien, including Blue Times (2015), Individual Stories. Collecting as Portrait and Methodology (2015), and Political Populism (2015–2016). With This Is Ornamental, Kunsthalle Wien now presents the first solo show of Afif’s work in Austria.

Saâdane Afif‘s practice is characterized by extreme variability—even fluidity— between forms, categories, inspirations and methods used. Always pushing the limits of the artwork as an object fashioned by a demiurge artist, he creates ever-changing works that are only temporarily crystallized. To create them, he appeals to collaborators of diverse horizons, who bring their subjectivity and their know-how which he then re-appropriates and makes resound in his works, comparable to interminable feedback loops. For the artist, the author is not dead but multiplied ad infinitum. In the same way, the reception and the interpretation of his works are multiplied and amplified. Each collaboration is the manifestation of the subjective interpretation of an existing work and each incipient work is a remake, a continuation, a derivation of previous parts.

For the exhibition at Kunsthalle Wien Karlsplatz, a new inflection comes into play. Not only does Afif continue this method of collaboration, derivation and variation—always engaging the authorship of the work, its reification as an object and its reception. He also addresses the entire process of musealization, institutionalization, and, finally, of historicization.

In early 2014, Saâdane Afif presented the performance Souvenir: La Leçon de Géométrie as part of the 5th Marrakech Biennale. Professor Dahmad Boutfounast was invited to give geometry lessons on the legendary Djemaa el Fna square. At nightfall, acrobats, hucksters, storytellers, musicians, snake charmers, fortunetellers and crooks of all kinds move about or perform on it. Every day at dusk, Professor Boutfounast, equipped with a flipchart, tackled the basics of Euclidean geometry in seven chapters: point, line, and plane; the circle; the triangle; the square; the rectangle; the polygon; and finally the volume. Through a complex process of sedimentation and concatenation, the performance became the point of departure of a vast linguistic and formal investigation, which led to the first development the artist now presents in his exhibition This Is Ornamental at the Kunsthalle Wien. The Heptahedron In 2016, Saâdane Afif commissioned writer Thomas Clerc to write a play based on Souvenir: La Leçon de Géométrie and elaborate on an argument imagined by the artist: “Sometime after this event, unusual things happened in Marrakech; some characters typical of the Djemaa el Fna began to speak ‘in geometry,’ an ornamental language. We could see but especially hear conversations of very high abstraction in the streets of the Casbah, or on the cafés’ terraces bordering the square. It is one of these which will be faithfully reported to us a few years later in Vienna, in a play written by a direct witness.” The commissioned work of literature is seen as an extension of a past moment—the performance—and the promise of a future one, in the work of the artist: it emanates from it and at the same time inspires its future developments.

It was only in 2017 that the artist discovered in Marrakech, at the bend of an exhibition wall at the Maison de la Photographie, a portrait from the 1930s of a young Arab woman playing French billiards[1]. She was Yasmine d‘Ouezzan (1913–1997), a French-Moroccan woman, the first French female carom billiards champion, and a muse of some artists of her time. Implemented into the play in the course of its writing, she eventually became its main character.

The narration and outline of the characters oscillates between absurdity, abstraction, stereotype and caricature, opening the path for multiple interpretations. Despite the abstraction of the language and the absurdity of certain situations, the theatre piece revolves around a quest for meaning, Yasmine’s personal quest, figured by the search for a heptahedron—a seven-sided geometric volume resembling a house. The resolution of her search seems to be conditioned by the exchange with the other seven characters, ultimately leading her to open herself to a radical otherness. The language becomes both a tool and ornament in the relationships between the characters as well as a viaticum for Yasmine to move towards another mode of existence.

This Is Ornamental at the Kunsthalle Wien Karlsplatz is Saâdane Afif’s first exhibition experiment arising from Thomas Clerc’s text L’Heptaèdre, and draws on its two core elements: the matter of the text itself, the language, and its main character, Yasmine d’Ouezzan.

The English version of the script is screened entirely on a large LED panel. Placed high at one end of the exhibition space, it is immediately reminiscent of supertitles used in theatres. On the other side of the gallery, around sixty documents about Yasmine d’Ouezzan’s life—all gathered during the months preceding the exhibition—are presented on a several-metre-long structure made of wooden panels and painted yellow. The scenography, highly inspired by the spatial configuration and the architecture of Kunsthalle Wien Karlsplatz, evokes temporary exhibitions in town halls or at tourist information centers. Yasmine d’Ouezzan, the champion of French billiards from 1932 to 1938, enjoyed a certain notoriety in European bourgeois circles of the first half of the twentieth century and was even the muse of artists such as Vincent Scotto. However, for the general public, her fame soon fell into oblivion. In a single gesture, Afif not only pays tribute to her, but also reintroduces her into a differentiated cultural history, bringing into circulation facts from “minor history,” undermining the process of official historicization and its share of great men. Including the voices of journalists who wrote articles, the images taken by photographers, the documents gathered by archivists and all those who write history, the work creates an anonymous polyphony, without falling into the trap of ideological instrumentalization. The entire exhibition oscillates between fictional and documentary moments, between (fake) musealization and the creation of a myth. In Saâdane Afif’s work, d’Ouezzan becomes a motif, inflected in several manners and metamorphosed by the artist in his own quest to invent and create a new artistic shape through history and space.

The title of the exhibition, This Is Ornamental, sounds like a counterpoint to the lesson that Adolf Loos wanted to deliver in 1910 when, in Ornament and Crime, he banished the ornament, which he described as superfluous and outmoded feature belonging to the field of architecture and crafts. In the Western tradition, ornamentation has always, until recently, been understood as a pleasant periphery of a central subject that alone makes sense. Ornamentation occupies a very different place in the Orient, where, through the religious prohibition of figuration, it has unfolded into a complex system aiming at cognitive and emotional aesthetic experience—far beyond the formalistic or universal-essentialist reading that the West has long made of it. In the exhibition, there is no decoration or variation on what we would typically read as ornamental. By bold reversal, the entire exhibition is presented as ornamental—and with it the themes that cross it: language, geometry, the figure of Yasmine, art. In this way, the artist not only inscribes his intervention at odds with the usual hierarchies of the visible but also opens a transcultural dialogue between the East and the West, playing on the respective and reciprocal projections and receptions that have defined a conflictual, stereotypical and often violent relationship.

Afif’s art ultimately grows out of a political gesture that seeks to offer resistance to the idea of a linear and eventually completed process and to straightforward art consumption. He opens his works up and encourages viewers to experience them from a wide variety of perspectives. Rather than celebrating the death of the author or the relativity of the work of art, these constant feedback loops sustain an—often melancholic—meditation on vanity and impermanence. As long as the works of art undergo translation and declension, as long as they prompt—accurate or mistaken, expert or amateurish—comments, they stay alive and do not succumb to the reification fetishized by the art world.

[1] French billiards, also known as carom billiards, is a type of billiards game. It is usually played by two players with three balls. In addition to the carom (red ball), each player has a cue ball either dotted or yellow. The general concept is to hit the ball at the two others on a single shot. Each player has a “distance to cover”, which means a certain amount of points to score, in order to win the game. The exact date of origin of carom billiards is somewhat obscure but is thought to be traceable to 18th-century France

Saâdane Afif. This Is Ornamental

An interview with the artist as well as an exhibition tour with curator Anne Faucheret can be viewed online.