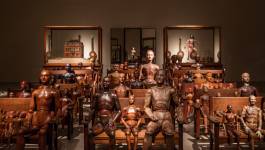 “My art occupies a fluctuating netherspace between documentary and fantasy. While my own history inevitably informs my work, my interest is in imagining and telling new stories that comment on our common cultural inheritance.” (Ydessa Hendeles)

Death to Pigs is the first comprehensive retrospective in Europe dedicated to Canadian artist Ydessa Hendeles. Her practice is characterised by the fusion of experiences, accounts, and interpretations. Her compositions develop independent narratives and convey reflections on belonging, otherness, and exclusion. Her work tells a history of the 20th century that reflects on how personal as well as national identities have been established over time.

Hendeles’s work is closely linked to her own biography as the daughter of Holocaust survivors who immigrated to Canada in the early 1950s. The narratives she develops in her artworks are both universal and specific—they deal with subjects such as loss and alienation, and invite viewers to find or forge a connection.
In her artistic practice, Hendeles not only reflects on her own life and myriad experiences, but also alludes to basic forms of universal understanding. She examines mechanisms of social inclusion and exclusion, and their relation to perceptions of “otherness”. The philosopher Zygmunt Bauman described modernisation as a process that has not only led to rationalisation and individual freedom, but also to control and social marginalisation. According to Bauman, the onset of industrialisation generated a new world order that did not facilitate integration of all social groups. Instead, supposed “otherness” became reason for indeterminate fears.

Regressive tendencies in contemporary politics and society generate widely discussed notions of “foreignness” and “otherness”. Populist and conservative parties as well as identitarian movements propagate ideas of alleged cultural identity as an assumed simplification of complex connections. Hendeles’s works remind us of the dialectics of social evolutions, and encourage us to learn from history. In her works, she looks back on the past to comment on our future, a future that can only be understood through its global interconnectedness.

Ydessa Hendeles’s oeuvre is informed by topics such as collection and recollection, and inspired by cabinets of curiosities as well as the associated quest for traces of the past. The artist frequently works with found, often historical, objects and artefacts, which she integrates into an exhibition context or combines in complex, expansive installations. By using the “exhibition as a medium”, Hendeles not only questions the role of the artist, curator, and collector, but also puts their relationships in the present art system to the test.

The exhibition, on display in both halls of the Kunsthalle Wien Museumsquartier, weaves some of the central complexes of works the artist has created over the past thirteen years into a multi-layered narrative. The title of the exhibition derives from the installation Death to Pigs (2015–2016), presented in the upper exhibition hall. The work draws on the metaphor of the pig, showing how concepts and ideas about the animal have evolved and changed through cultural history—from fairy tale stories and religious contexts to murders carried out by the Manson family in the summer of 1969 and depictions in the mass media.

The story of the exhibition begins with the work Veronica’s Veil / Tigers’ Tale (2016–2018), that was recreated, augmented, and retitled for Kunsthalle Wien and presents the juxtaposition of two tales conjuring the miraculous and the magical for adults and children. From her wooden sleep… (2013), the central work in the lower exhibition hall, is an expansive arrangement featuring more than 150 historical wooden manikins, which form a seemingly closed society, putting the viewer in the uncomfortable position of an outside observer. The preceding installations, Blue Beard (2016) and Crypt (2016) introduce associated themes such as belonging and exclusion, and the underlying ideologies. Like many works, Canadian Child (2009) is closely linked to the artist’s life and is suggestive of the way the transformation of personal or national identity manifests itself externally.

In the upper exhibition hall, the installations The Dead Jumbo. (2011), THE BIRD THAT MADE THE BREEZE TO BLOW (2006–2011), Predators & Prey (The Denslow’s Mother Goose Project) (2005–2017), and Marburg! The Early Bird! (2008–2016) are on display. Marburg— Hendeles’s birthplace, and the first place her parents settled after the horrors of the Holocaust—has close links to the Brothers Grimm, who collected and transcribed fairy tales and legends. Fairy tales play a central role in Hendeles’s work. She traces the way fantasy worlds and stories for children reflect ideologies to show how certain belief and value systems are deeply anchored and infuse everyday life.

THE BIRD THAT MADE THE BREEZE TO BLOW (2006–2011) deals with post-war culture and the aftermath of trauma. It reflects on the disruption arising when a grave responsibility deriving from the past conflicts with a hopeful contemplation of the future. Modernism, technological development, and the aspirations associated are impeded by the psychological and emotional burdens that restrict the individual’s ability to act. Ultimately, the work is about finding a place in the world within the context of history, generation, culture, and nationality. Hendeles’s newly created site-specific work The Eagle and the Hare (2017) addresses the eagle as an ambiguous symbol of the divine and the demonic, protector and aggressor.

The works in the exhibition Death to Pigs present themselves as dense overlays of intensely researched cultural, historical, and autobiographical references. In their dramaturgy, they unfold in a subjective view of cultural history that relates to diverse social developments. The result is a multi-layered narrative that shows how socially constructive forces were used destructively time and again, how utopian ideas turned dystopian.

At the opening of the exhibition "Ydessa Hendeles. Death to Pigs", Markus Müller (art historian, journalist, and curator) and Gaëtane Verna (Director, The Power Plant, Toronto) discussed the diverse practice of Ydessa Hendeles. They further talked about the reception of Hendeles's work in Canada, where Verna recently curated an extensive solo exhibition of the artist, and about how the local background plays a role in the exhibition in Vienna.

Artist: Ydessa Hendeles
(born 1948 in Marburg) currently divides her time between studios in Toronto and New York. She studied at the University of Toronto, the New School of Art (Toronto), the Toronto Art Therapy Institute, and holds a PhD from the Amsterdam School for Cultural Analysis of the University of Amsterdam. She taught art history at the New School of Art and is an adjunct professor in the Department of Fine Art at the University of Toronto. In October 2017, Hendeles was awarded an honorary doctorate by the Philipps-Universität Marburg.
In 1980, she established The Ydessa Gallery, Toronto, where she represented Canadian artists exclusively, including Rodney Graham, Ken Lum, Jana Sterbak, Jeff Wall and Krzysztof Wodiczko. In 1987, she launched the exhibition program of the Ydessa Hendeles Art Foundation in Toronto, and in 1988 opened Canada’s first privately funded exhibition venue for contemporary art. By the time its building closed in 2012, the Foundation had mounted more than 35 major curated exhibitions.
Hendeles began to incorporate her own artistic projects into the exhibitions at the Foundation in the early 1990s. Her work has also been exhibited at: Haus der Kunst, Munich (2003); National Gallery of Canada, Ottawa (2004); Gwangju Biennale (2010); Marburger Kunstverein, Marburg (2010); Andrea Rosen Gallery, New York (2011); König Galerie, Berlin (2012); Institute of Contemporary Arts, London (2015); Kunsthaus Hamburg (2016); Tel Aviv Museum of Art, Tel Aviv (2016); New Museum, New York (2016); and The Power Plant, Toronto (2017). Hendeles is represented by Barbara Edwards Contemporary, Toronto, where her work, Death to Pigs, was first exhibited in 2016.