The exhibition includes adaptations of previous works as well as recent productions by Belgian artist Edith Dekyndt. For over two decades, Edith Dekyndt has created a large repertoire of single channel video projections, slide projections, sculptures and sound works, all of which are characterized by a sparse but playful aesthetic. Her video works counterpoise the methodical explorations of experimental video with a skeptical and deliberately erratic approach to minimalism.

Often flirting with the limitations of recording technology, she produces seemingly simple, evocative images that, in Dekyndt’s words, “are neither spectacular nor consumable,” and which set out to loosen the relationship between subjectivity and the world of facts.

Since 1999, Dekyndt’s installations have been produced under the umbrella of a Universal Research of Subjectivity, a consciously humorous phrase that functions both as an association – established in 2004 – and as a generative pseudonym that provides a speculative framework for her videos, sculptures and installations. This association/pseudonym establishes a focus on the division between microcosm and macrocosm, a fictional yet naturalized division that destines subjectivity to remain caught at the intersection of these two separated worlds.

A total of twelve installations were on show at Witte de With, including video, sculpture, and sound pieces, as well as slide projections and one set of photographic images. The works were ranging from wraithlike sculptural works like Ground Control (2008), a black helium balloon that moves around slowly and freely in one of the gallery spaces, to video works like Dream Machine (2006), in which the three primary colors alternate frame by frame at 24 frames per second, producing a jarring, disorienting effect on the viewer.

Dekyndt’s video-installation One Second of Silence (2008), which was presented at Witte de With, enabled a more directly political reading of Dekyndt’s work. Yet, it is not about a politics of identity; rather it is focused on identifying a space of subjectivity not immediately captured by organized political content - “global positions of people,” as the artist states, and a “focus on the occupation of space, by experiencing the meanings, contents, and particularities of the space (in) itself, as well as its socio-cultural and human context.” 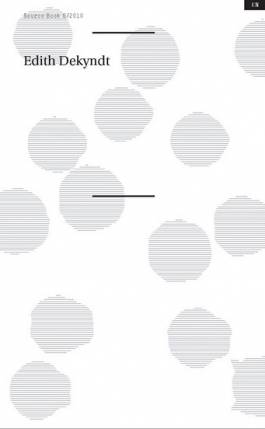