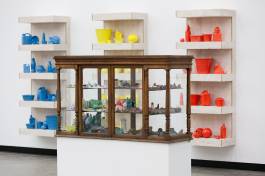 Artists are collectors, attracted to unusual material forms and immaterial phenomena. Benjamin Buchloh once credited Marcel Duchamp as the initial ‘artist-as-collector’ referring to his ready-mades. Through the collection and conservation of objects, Duchamp was concerned with the relation between source material and artistic work.

The exhibition Individual Stories at Kunsthalle Wien presented a selection of 20 contemporary artists who have agreed to show the personal items they have collected, recorded or documented, or the artworks, which have evolved from the process of collecting.

The act of collecting as a personalized and individual engagement is a means to learn more about the persona/collector and, in the specific case of an artists’ collection, an approach toward their artistic practice. Addressing different formal, aesthetic and conceptual concerns, the collections vary and lead a path to understanding the respective artists’ works. While some collections exist as independent from artistic practice, others constitute an artistic methodology or could be regarded as works of art themselves.
The items shown at Kunsthalle Wien each have a personal relation to their collector. Thus, the exhibition aims at simultaneously reading the collections as portraits of the artists and their fields of interests. It offers a new view on contemporary artistic practice through the actions taken towards and methodology behind collecting.

On occasions driven by curiosity, at other times by a systematic search for something, the various collections presented in the exhibition offer dramatically different approaches to the broad field of collecting as such. The emphasis on individual portraits allows for alternative access to what can be a very intimate part of artistic work, thus facilitating fresh perspective on the artists’ oeuvre.

Johannes Wohnseifer’s interest in Peter Revson and Peter Brüning (one a racecar driver, the other one an artist), for instance, stems from coincidence and develops in a private collection of images, books, replica and memorabilia of both. Wohnseifer draws connections between them both, where an actual confirmation of this cannot be found by research but only through Wohnseifer’s personal associations.

Since 2008, Saâdane Afif is building the Fountain Archives. This highly conceptual collection consists of printed reproductions of Marcel Duchamp’s Fountain. An ‘oeuvre hobby’ for Afif, this mise en abyme is both a personal obsession and a work of art.

Camille Henrot’s Collections Préhistoriques illustrate her interest in prehistoric times and originate in the artist’s obsession with collecting and exchanging objects. Henrot’s interest in the unconscious determines the collection as an intuitive confrontation of the ancient with the contemporary to provide a new way of connecting ideas about art, technology and sexuality.

Interested in anthropology as well, G.T. Pellizzi’s works present a collection of items that symbolize the bow from the Holocene to the Anthropocene – more precise: the time span from industrialization to plastic age. Whereas the content-wise overlap with Camille Henrot’s works in the exhibition is coincidence, the comparison of their different tactics was intended: Both are based on the method of collecting, which proves that not only the personal interest behind a collection is worth looking into, but also the individual approach to this technique bears potential for closer research.

Hubert Scheibl collects botanical study objects produced by Robert and Reinhold Brendel in the 19th century as a source of inspiration. The fantastic shapes and rich colors of these highly detailed models partly influence his new works in an abstract form.

Barbara Bloom’s entire artistic practice is focused on collecting. Assembling objects, combining and displaying them is her approach to contemporary culture, individual and collective memory. Her works – installations, photographs – are based on questioning appearances, exploring the desire for possessions, and commenting on the act of collecting. At Kunsthalle Wien, she will present selected objects from her vast personal archives of ephemera and everyday objects.

A similar approach can be found in the work of Hans-Peter Feldmann, who would not describe himself as an artist, but as a compulsive collector and appropriator of found images and everyday ephemera. Feldmann’s works have an aesthetic and conceptual simplicity and share an interest in the formal language of typology which is characterized by pictorial assemblages of the overlooked and mundane.

Some videos documenting the exhibition can be viewed online.

An accompanying publication with photographs by Marie Angeletti, documents the collections in an intimate fashion.
In addition each of the artists wrote a short text on why he or she began to collect.