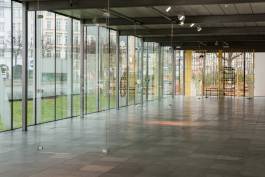 For his exhibition at Kunsthalle Wien Karlsplatz Tony Conrad further develops his ongoing concerns with a variety of power structures – here in particular those surrounding notions of confinement, and transparency – both in terms of social constructs and those imposed by the various media he employs.

Among the works in this exhibition, Conrad recreated a jail cell – complete with cot, toilet and sink – that also served as an object that a video was both projected on to and through. This video, whose participants include a number of artists such as Tony Oursler and the late Mike Kelley, was shot in 1982 and 1983.

It was originally begun with the expectation that it would be concluded much later, and is now comprised of selections from six hours of footage (converted from black and white 16mm film), separated by blips and shot changes, that depict the antics of oddly indifferent inmates, from nonsensical singing to taunting banter. This jail cell – a replica of the original that still stands in Conrad’s Buffalo studio where the film was shot – sits with its door wide open. As Conrad puts it, “Visit my studio; the cells beckon one to enter; the open doors promise transparency, not confinement.”

In addition to this cell and video, and furthering the complications of notions of transparency, are a series of glass panels are suspended from the ceiling of the space. These works, which Conrad titles Paintings, have a legible relationship to the glass pavilion structure of Kunsthalle Wien Karsplatz, but also embody a humorous twofold transparency: each pane of glass has had a small “peep hole” cut into it. Who needs a peep hole in a clear glass screen? Matching the glass pavilion-like structure, these sculptures work as sort of mute-dividers in the space. As a way to separate the different works to be installed, they also - being clear - make it obvious that as an object to fashion boundaries, they fail. Instead they project and highlight the overlaps in the different works. Conrad’s practice is one of countless crossovers and media chimeras. These screens act as a sort of faulty punctuation between the spuriously perceived divisions in Conrad’s practice. They both highlight – by physically interrupting the space as a screen – and refute – through their double transparency – the divisions between the works as discrete or separate.

Further, these glass pieces, along with a series on canvas of orthographic diagrams of the glass Paintings, illustrate the discursive differential between physical vision and the “gaze.” Here seeing is directed along two paradoxically incompatible pathways: one follows the transparency of glass; the other is the conceptual magnetism exerted upon the viewer by the presence of the hole.

Installed amidst these glass screens (as something to be looked at through), is The Grommet Horn (ca. 1970). This object, designated as one of Conrad’s “invented acoustical tools,” is an early sonic analog of the Paintings. Tiny noises may be produced by blowing out through grommets that puncture a plastic bottle. The confusion of whether breath shall pass in or out of the bottle presages the indeterminacy of the open jail cell, in which there is no confinement and neither in nor out. There is no logic here of “freedom” or “control.”

This exhibition highlights and contextualizes the crossovers between the different aspects of Conrad’s practice, outlining the unique way in which he dissolves the perceived divisions between the varied artistic media he employs. 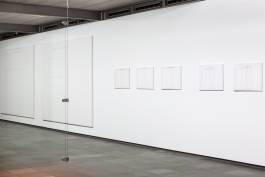 Cultural critic and music journalist Diedrich Diederichsen talks to Tony Conrad about his multi-faceted and diverse practice that fluidly crosses between and through a variety of mediums and concepts.

Artist: Tony Conrad
(born 1940, Concord, New Hampshire, USA) has been at the forefront of cultural developments from minimalism to underground film, „concept art,“ postmodern appropriation, and the most sophisticated rock and roll. Creator of the „structural“ film, The Flicker, collaborator on Jack Smith‘s Flaming Creatures and Normal Love, follower of Henry Flynt‘s radical anti-art, member of the Theatre of Eternal Music and the first incarnation of The Velvet Underground, and early associate of Mike Kelley, Tony Oursler, and Cindy Sherman, Conrad’s work has been shown at the Museum of Modern Art, Documenta, Venice Biennale, Tate Modern, LA Museum of Contemporary Art, and many others. He exhibits at Greene Naftali Gallery in New York and Galerie Daniel Buchholz in Berlin and Cologne. 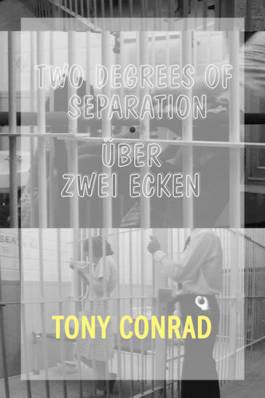