This year’s Fine Art grant “ars viva”, awarded by the Cultural Committee of German Business and the BDI, was dedicated to film. It has been given to the Berlin artist Omer Fast and the Hamburg artist, Jeanne Faust.

Individual works of the two artists have already been shown in previous exhibitions at the Frankfurt Kunstverein. In the ars viva presentation, visitors has now seen new works from both Jeanne Faust and Omer Fast.

In the context of art, the works of the artists Omer Fast and Jeanne Faust engage critically in different ways with the social and aesthetic function of film and television. Both the repertoire of images and narratives of the classical cinematographic medium and the communicative function of the mass medium television are investigated. Just as the medium film cannot be reduced today to a single complex of discourses, so too is its material character manifold and diverse. Accordingly, in the exhibition, video and film formats will be presented alongside photographs. The medium film serves the artists as a matrix for their critical analytical investigations. References emerge to contexts the history of media as well as to phenomena of representation in contemporary everyday life. 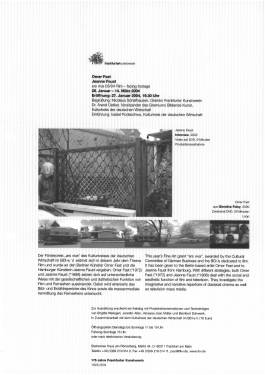 Jeanne Faust
was born in Wiesbaden in 1968 and studied at the Academy of Fine Arts in Hamburg.
In her photographs, films and video installations, she investigates stereotypes of the narrative cinema image and traces characteristics of German and French films scripted by the director. She is interested in the ambivalence of the fictitious and the authentic. In her films and photographs, Faust stages moments which seem to be part of a story or documentation, and thus part of a narrative form of representation. They seem to be sections of a whole lying outside the frame or narrative time. Since Faust’s works often seem to refer back to an unconscious cultural repertoire of cinematic knowledge of images, it is not very difficult for the viewer to find points of association in the section-like scenes because, despite all their similarity with the worlds of cinematic images, Jeanne Faust’s works are above all conceptual experimental arrangements for the way cinematographic images would look if they did not tell stories, but were fragments of a language of the cinema.
Faust is an attentive observer of minimal social events which she restages with a lot of sensitivity for the situation. The locations of her films and photographs are precisely chosen in their simplicity and are staged just as casually and coincidentally as are her protagonists.

Omer Fast
was born in 1972 in Jerusalem, studied in Boston and New York and has been living in Berlin since 2001.
He, too, is interested in the medium of film as an interface between fiction and authenticity. Whereas Faust’s works mainly reveal relations with classical cinema film, Fast’s works show a particular interest in mass-reproduced images such as those of Hollywood. Thus it is not surprising that the video medium is not only investigated with regard to the aesthetic properties of its images, but that also, the structures of distribution and reception specific to the medium constitute an essential element of his works.
In contrast to Jeanne Faust, who tells of the effect of cinematographic images on the perception of reality, Fast is preoccupied with a paradoxical overlapping of (historical) reality with documentary representation. In his most recent project, “Spielberg’s List“, in which he refers to Steven Spielberg’s film, “Schindler’s List”, he combines interviews with actors and scenes from Spielberg’s films and confronts these with documentary material from the original shooting locations. For his works he uses not only film and video formats, but also found material and material he has shot himself which he employs for his manipulations by means of inserts and audiovisual overdubs. Making use of the material, his often subtly ‘collaged’ films undermine the narrative structure of the original and, through the reworking, lend the material a new, critical plane of communication. 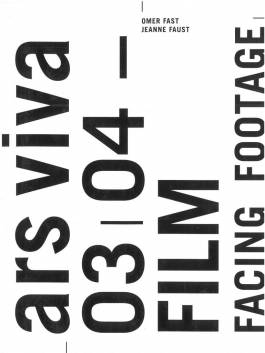