Kate Newby
Let the other thing in 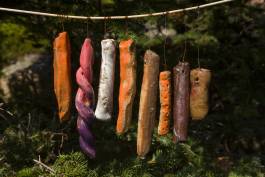 On a low-lying platform, the artist places groupings of kiln-fired rocks and sticks she made while living on the Fogo Island. Newby assigns each group a title, suggesting a system is at work. The artist derives this from a similar preference Fogo Islanders have for assigning names to places, landmarks and things.

Printed in an accompaniment pamphlet for Kate Newby‘s exhibition Let The Other Thing In (June 27 – September 8, 2013) at The Fogo Island Gallery.

1. Kate Newby pulls a pebble from her pocket. Green and smooth, the stone feels fragile. She stands by a frozen pond on Fogo Island. Next to her PJ Decker turns it over and asks, “Did you paint it?” assuming it’s a real rock, found here on this island, that’s rocks on rock. He passes it back, and I skim it across the ice. The pebble is painted; it’s been glazed and isn’t rock, not in the traditional sense, but porcelain, made by Kate to be skipped in water. Bringing up the question: How can you throw art into a pond?

And, after it’s gone, what is it? What was it? This fleeting moment, an action, a game, with only three witnesses and a photo taken on an iPhone. Is it art?

But that’s the point of Kate’s work, that art can literally be a throwaway moment, one she’s repeated in waters around Manhattan and New Orleans and in New Zealand.

2. Her art is fleeting, as evanescent as that skipped stone. Writing about it pins it down like a butterfly stuck to velvet. She doesn’t want her work forced into tight definitions. For her there’s no right interpretation. Instead it’s about experiencing a moment, something fleeting, something for which words are no substitute.

3. Her work asks for an attunement to the world — a way of seeing. But, her vision isn’t about the grand or majestic. She likes the humble — the way a bit of sidewalk is patched or how a shopping bag blowing in the wind catches in a tree. She describes it, “Having the time of its life out there blowing about, being cheeky, somehow flying past the rules and regulations of the city… not a bad model for art in the world. Why stop short? Why not let it expand out and make up more of its own rules instead of fitting into these seemingly narrow spaces?” Kate is interested in finding expansive moments in the narrow spaces — in things as overlooked as a plastic bag.

4. For her show, I’ll follow you down the road, in 2011 in New Zealand Kate noticed the nails in the floorboards of her gallery made a fragile line. She recreated it and turned off the lights, hoping the windows would illuminate it. She wanted people to see the nail-line but didn’t want to direct their attention overtly to it. Of course, that’s risky. It’s easy to miss the line, or mistake it simply for nails, but the chance is worth it. The installation asks you to see everything no matter how modest.

5. On a worn wooden platform, collections of rocks seem grouped in a quasi-scientific way with handwritten labels. There’s “Frank” (named for poet Frank O’Hara), “Walks with men,” as well as “Copper,” “Katorina’s,” and “Saturday.” They beg questions like: What does “Maureen’s” have to do with the tiny red pebbles? Or “Tina’s” with what look like bone shards and a tooth?

6. The specific condition of each object’s creation is inseparable from the piece itself. Each is suffused with Kate’s emotions in that moment or the music she is listening to. The rocks become a diary of her daily, lived experience, and in that sense the groupings create a geology of emotion.

7. Her work is almost radical in its interest in the small, slight and fleeting emotions and the throwaway things most often ignored, whether they’re pebbles or potholes or patches in a sidewalk. In these pieces she’ll also use slogans found on juice and soda bottles. Recycling them allows her to hit on the familiar, as if activating traces of meaning in something we’d usually ignore.

8. Take the puddle she made last winter on Fogo Island, an artwork that could be easily overlooked, not set out in a place where people would find it. Creating it was hard, requiring a fire to thaw the ground and then Kate’s digging the hole — itself an ordeal since 20cm down was rock. But, as soon as the concrete was dry, rain filled the puddle. The next day the water froze and just beyond it, the ocean froze. A week later her pothole was covered in snow, then a digger drove over it, but the puddle is still there, and everything from the snow to the digger are part of the piece’s life cycle. Her pothole connects to 1960s land art — works made with the idea that they should exist in a landscape with whatever decay happened. But, Robert Smithson’s Spiral Jetty sprawling in the Great Salt Lake was monumental. Hers draws attention to something often ignored.

Kate’s work is radically slight, easy to miss; or, to mistake for something that isn’t art at all, for just a puddle, just a pebble tossed into a pond. That’s the risk in inviting people to see the everyday afresh, and to wonder at the environment around you, and to question whether the moment of art is everywhere, possible in everything.

Let the other thing in

The publication accompanies the exhibition, co-published by Fogo Island Arts and Sternberg Press (Berlin) including an interview with Newby by Mami Kataoka, an essay by Jennifer Kabat, and a conversation between Newby, geologist Paul Dean, and strategist Daniel Wong, as well as the artist’s "Skim Stone Pictures," a photo series of people skimming her ceramic stones into various bodies of water. 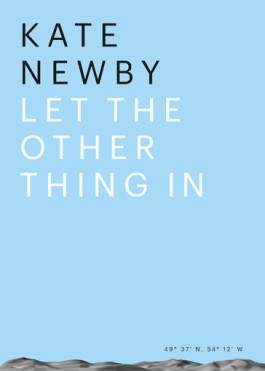 The foregoing texts and images are provided and copyrighted by: https://www.fogoislandarts.ca/news/exhibitions/kate-newby-let-thing/