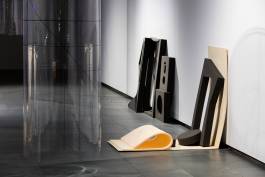 The Kunsthalle Wien Prize is the symbolic node of a network that has as its aim the achievement of greater visibility for young students. As an art institution of the city, the Kunsthalle Wien, which relies by definition on the interconnection of artistic practice and its theoretical reflection, has been co-operating with the University of Applied Arts since 2002.

In order to continue to expand the network, this original co-operation will be extended to include the Academy of Fine Arts Vienna from 2015 on.

In June 2015 a team of jury members reviewed the final degree projects from both universities and selected Karina Mendreczky (University of Applied Arts Vienna) and Anastasiya Yarovenko (Academy of Fine Arts Vienna) to be this year’s prize-winners.

In her installation Thin Dream, Karina Mendreczky transfers the transitory aspect of a fictional landscape to an image of light and shadow, made of transparent set pieces depicting the natural world and projected drawings, which appear realistically spatial and at the same time ephemeral.

Silhouettes of trees, cut from acrylic sheets, contain drawings carved with an etching needle. They are projected onto the back wall of the scene by small spotlights, where they create the impression of real, large-format drawings. With this approach, Thin Dream opens up a broad spectrum of potential associations and subjects for the beholder: “To paraphrase Marcuse, who ascribed another kind of reality to art, namely the reality of disassociation, from which alone art can create new insight, the young artist stages a scene of placeless, alienated nature, precisely in order through this poetic presentation to shake up the reality of nature as dream landscape both intellectually and emotionally,” according to Rector of the University of Applied Arts Gerald Bast, calling attention to the nuanced relationship between illusion and reality present in the piece. The technical means employed, which originate in part from the field of printing and in part from that of stage lighting, point to the fact that nature and its experience are not reproducible, no matter how much nature is forced to serve time and again as a surface for our projections of the supposed unspoiled. However, with this work, the artist also reflects on her continual commuting between Hungary and Austria, which, in addition to posing questions of personal belonging, also makes socio-politically constructed scenarios virulent: “Over the last four or five years I’ve only been meeting people who have left their homes and can’t really manage to gain a foothold here,” Karina Mendrezcky says. “That’s why I also wanted to create a place that has to do with this issue.”

Ukraine-born Anastasiya Yarovenko is concerned with the body’s relationship to societal structures and behaviours, to space and surroundings. In her installation Mimicry she attempts, in her own words, “to assemble a selection of objects, which do not in themselves represent any definitive state, but do however possess the potential to interact with their observers or their environment”.

These objects consist of modular furniture-like elements, a silicone carpet and elements made of foam material, which are leaned against the wall. All of these objects fit together into a single portable case, thus signalling mobility and transitory states. For Anastasiya Yarovenko, the fundamental meaning of “space” is to be found in its potential for the reproduction and connection of various aspects of reality, in which it can be interpreted respectively as a container for particular situations, material gestures and “collective images”. To enhance these sorts of contents, the artist makes use of the grid, among other things, as a formal device for making the surfaces of the objects, the interior of the space as well as the social contexts palpable. This grid, which is never laid out in a strictly geometric fashion, reflects at the same time the ambivalent situation of our era, in which societal norms, structures and patterns are alternately de- and reconstructed. “With this conceptual piece, which reacts in a very sensitive way to current political circumstances, Anastasiya Yarovenko is an excellent choice to be the first artist to represent the Academy in this co-operation,” Academy of Fine Arts rector Eva Blimlinger emphasized.

Artists:
Karina Mendreczky
(born 1988 in Budapest) studied graphic and print arts at the University of Applied Arts Vienna with Sigbert Schenk and Jan Svenungsson (diploma). In 2014/2015 she pursued a Bachelor of Arts for Print & Time-Based Media at Wimbledon College of Arts in London. Since 2013, she has participated in exhibitions in Austria and the United Kingdom.

Anastasiya Yarovenko
(born 1983 in Tula/RUS) studied at the Academy of Fine Arts Vienna with Amelie von Wulffen, Silke Otto-Knapp, Henning Bohl and Kirsi Mikkola (diploma). In 2015 she was a participant in the School of Kyiv Biennale 2015 and the 6th Moscow Biennale of Contemporary Art.

Kunsthalle Wien Prize & Jury 2015: Nicolaus Schafhausen and Lucas Gehrmann (Kunsthalle Wien), who participated in both selection processes, as well as Rector Gerald Bast and Bärbel Vischer for the University of Applied Arts Vienna and Mona Hahn, Erwin Bohatsch and Hemma Schmutz for the Academy of Fine Arts Vienna.

Along with a color insert, this publication includes an essay on Mendreczky’s work by Bärbel Vischer, a conversation between the artist, Lucas Gehrmann, and Nicolaus Schafhausen, as well as forewords by Gerald Bast and Schafhausen. 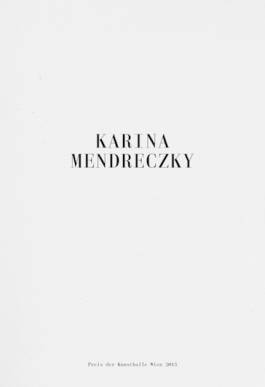 Along with a color insert, this publication includes an essay on the artist’s work by Hemma Schmutz, a conversation between the artist, Lucas Gehrmann, and Nicolaus Schafhausen, as well as forewords by Eva Bliminger and Schafhausen. 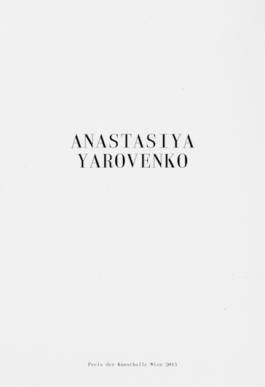