Flaka Haliti
Speculating on the Blue 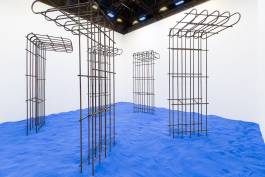 For her solo presentation at the Kosovo Pavilion Flaka Haliti conceived the site-specific installation Speculating on the Blue reflecting on the meaning of borders, democracy, freedom and mobility.

The skeletons of barrier-like objects that occupy the exhibition space are a reference to the aesthetics of the concrete walls that are erected between nations and regions as a materialization of conflict. Haliti’s installation aims at de-militarizing and de-contextualizing this specific aesthetic regime by stripping the columns down to their material essence and juxtaposing them with elements that are by nature resistant to the concept of borders. In this scenario, the horizon and the blue pictorial ground create a counter image to the concept of borders and function as a tool to raise new perspectives. The interplay of the elements and the different images they generate is the artist’s method for creating an intermediate space that allows for the subjective experience of viewers engaging with her work.

Her approach is one of recontextualizing global politics through disconnection from its regime of appearance. The metaphor of the horizon, simultaneously emblem of possibility and enigma of our limitations is woven into the fabric of our past and present. By drawing on the universal meaning of this metaphor, the artist removes the image economy of the horizon from any specific spatial-temporal context and speculates on its validity as an eternal truth.

With Speculating on the Blue, Flaka Haliti positions the observer in an intermediate space that oscillates between expansion and confinement, proximity and distance; a space that opens up multiple temporal dimensions simultaneously and as a result is experienced as a work of constant actualization. 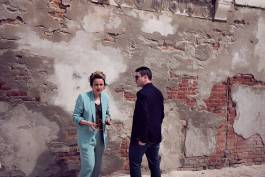 Artist: Flaka Haliti
(born 1982 in Prishtina, Kosovo, lives in Munich) represented her home country Kosovo at the Venice Biennale in 2015. She was a scholarship holder of the Villa Romana in Florence in 2017 and is the recipient of the Ars Viva Prize. She completed her studies at the College of Fine Arts, Städelschule in Frankfurt am Main and presented her artistic work in individual exhibitions at the mumok - Museum Moderne Kunst in Vienna, S.A.L.T.S. Kunstverein Birsfelden, Kunsthalle Lingen and the Kunsthaus Hamburg and in group exhibitions at Museum Ludwig Cologne, Kunsthalle Vienna and Lenbachhaus Munich, amongst others. Also in 2018 Haliti participated in Public Art Munich and the Busan Biennale. In 2019 she was a participant in the Fellbach Triennial for sculpture, where she received the Ludwig Gies Prize from the Letter Stiftung. She was nominated for the Preis der Nationalgalerie in 2019 and was exhibited at the Hamburger Bahnhof, Berlin.

Flaka Haliti
Speculating on the Blue

Published in conjunction with Flaka Haliti’s presentation, this book continues the artist’s invitation to encounter a visual field in which territorial boundaries are referenced and mediated by the sensory. 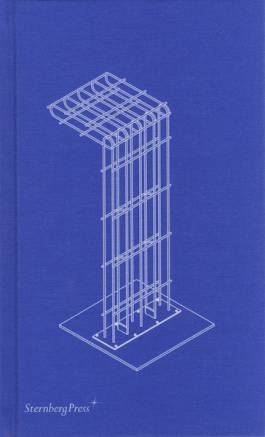 The foregoing texts and images are provided and copyrighted by:

Pavilion of The Republic of Kosovo, Flaka Haliti, 2015, Sand, Metal, Light. Photos: Marc Krause, Courtesy of the Artist and LambdaLambdaLambda.