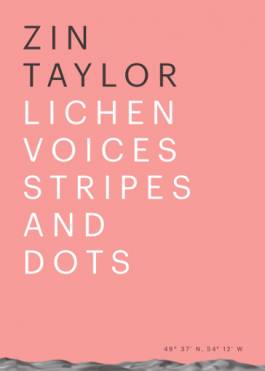 Writing is central to Zin Taylor’s practice. Parallel to a number of artist books, Taylor has made a series of sculptural works the artist proposes as a form of storytelling. How else to understand his project The Story of Stripes and Dots but to “read” the eponymous objects he makes to propel it forward?

Taylor conceives of his sculptural components—stripes and dots in many variations—as words in a sentence, the articulation of which can be ongoing. By substituting objects for words, Taylor seeks not to assert equivalence between the two so much as establish the essentially spatialized perception he has of the way language functions. A striking clarity defines the artist’s vision. Taylor sees in language—in art—the highly defined dimensions of a world he can work within.

This catalogue accompanies Taylor’s exhibition “The Story of Stripes and Dots (Chapter 5)” at Fogo Island Gallery (September 27, 2013–March 23, 2014), which follows his two-part residency with Fogo Island Arts in 2010 and 2012. Featuring essays by Zoë Gray and Saelan Twerdy, and Taylor in conversation with Patrick Staff and Robin Simpson, the book also presents the artist’s portfolio An Index Describing the Individual 19 Thoughts about Stripes and Dots Arranged on a Vitrine Made of Brass and Glass.