Work it, feel it! 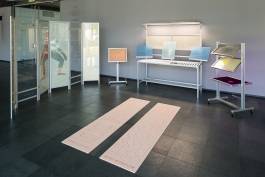 Work it, feel it!, Kunsthalle Wien’s contribution to the VIENNA BIENNALE 2017, revolves around notions of work and body – now and in the future. Instead of uncritically reproducing a discourse around work that focuses on innovation and optimization – as is often the case – the artists of the exhibition Work it, feel it! deliberately take a critical approach towards this topic – one that is informed by a profound examination of historic and current disciplinary mechanisms shaping society. The focus lies on the disciplining of the human body, on the demands placed on it and its possibilities to act, as seen against the backdrop of the capitalist organization and definition of work as well as increasing automation.

Repressive or stimulating, biopolitical measures have – since industrialization – shaped individuals and workers, thereby ensuring socially acceptable and productive behavior. Since the mid 20th century “enclosed milieus”, such as schools, factories or the family are being replaced by the mechanisms of a “society of control” that operates through knowledge and information, thereby denying or granting access. Today, individual self-control and conformity are ensured by permanent processes of evaluation and examination, development and growth, collection and exploitation of data, as well as by real-time communication and monitoring.

Work is an activity central to human beings. As such, it clearly reveals how societies of control operate. Today, work is about more than just securing one’s economic livelihood: It seems to be the only way to attain social recognition; while its primacy in life – controlling the direction and pace of daily life – remains widely unquestioned. As work has become more flexible and more precarious, workers are forced to conceive themselves as a company and to market themselves as their own product. Competence alone is not enough: The total mind-body package has to be just right and ready to be activated during the work process. As such, control mechanisms no longer serve only to train and shape the body as a perfect tool for production and consumption. The body itself becomes the target of work. To upgrade the self in increasingly competitive contexts, technologies can be of help – moving closer and closer to the body or even entering it. Life merges with work and technology, while the latter accesses all of our activities, private feelings, wishes and thoughts, exploits them and makes them productive.

The slogan Work it, feel it! does not only represent an ironic watchword commenting the unquestioned and willing submission to modern work requirements. It is also intended to remind us of (partly unconscious) moments of bodily resistance: Affects or symptoms such as depression, stress, nervousness, and illness are usually understood and treated as common side effects; but they can also be interpreted as a source of physical resistance. And there are some human needs that can’t be co-opted: Sleep and love resist the transformation of bodies into total productivity.

From today’s perspective and with a view towards the future, the artists of the exhibition analyze and speculate as they ask questions about the subjugation of the body and about strategies of escape and resistance. The artists assert their position using a variety of media. Sidsel Meineche Hansen, for example, presents a print series and a wooden sculpture to examine the individual’s relationship to neo-capitalist notions of work. Juliette Goiffon and Charles Beauté’s plexiglass and brass objects evoke environments that alternate between a futuristic home office and fitness studio interiors. Danilo Correale uses his video work to discuss sleep as a form of resistance or even protest, while the group Apparatus 22 marks the human body as a battlefield of civilization norms by means of poetic texts tattooed on leather. The artworks on display serve as a starting point for an extensive side program that offers an in-depth examination of the themes addressed in the exhibition.

Work it, feel it!

Ergonomic Futures is a multi-part project that asks questions about contemporary “fitness” through the lens of speculative evolution. What are future scenarios for imagining new types of human bodies, and how might this thought experiment reframe conversations about body normativity in the present day?
The lecture comes out of Tyler Coburn’s interviews with paleoanthropologists, ergonomists, evolutionary biologists, and genetic engineers.
www.ergonomicfutures.com