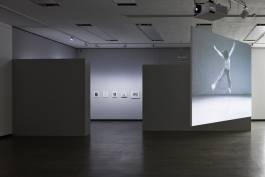 Babette Mangolte, an iconic figure of international experimental film, was showing her first solo exhibition in Austria at Kunsthalle Wien.

Mangolte’s early interests lay within the field of performance documenting the art, dance and theater scene of the 1970s. In the late 1970s she began to focus on the urban environment and the vast landscapes of the U.S. West Coast. I = Eye presents a diverse array of Mangolte’s films and photographic works including recent projects revisiting the transcription of performance and its historicisation. They connect in an absolutely unique form influences from silent cinema, American experimental films, and feminist film theory to generate her very special handwriting.

For the exhibition at Kunsthalle Wien Mangolte employs – in accordance to her central interest in the subjective camera – an experimental approach creating a three-dimensional score using time and space as a medium. The sequence of films and intermittent intervals of sound (either excerpts of works or voiceovers) plunged in darkness and projected on four separate screens take center-stage in the mise-en-scène of I = Eye allowing for a cinematic experience and choreography of perception. The score will be scripted to fit the exact opening hours of the institution producing an immersive choreography both of the works and their beholders as well as making a pronounced engagement with the format of an exhibition.

I = Eye will reflect on Mangolte’s own preoccupation with the perception of performance and investigations into medium-specificity, the transcription of the self on and off stage, inscribed by and for the camera. It will cover a wide range of works stemming from early cinematic and experimental films to her documentary photography of the theatre, dance, and performance of the New York scene in the 1970s with the addition of two remastered historical site-specific installations as well as recent projects.

There will be thirteen films on view as well as film stills from these films, which together will provide a broad insight into her experimental filmmaking practice. Mangolte’s films offer a visual experience that breaks with the gaze and thwarts the identification with the actors known from classical cinema. A key example for this practice is one of her earliest film, The Camera: Je or La Camera: I, which acts out the photographer’s point of view on the people she films and the city she lives in, New York. The film uses a subjective camera in order to provide an active sense of the relation between the person behind the camera and her subject, the photographer and the photographed.

The exhibition will also include the seminal photos of Trisha Brown’s 1973 Roof Piece as well as a number of diptychs made by combining different historical photographs that testify Mangolte’s interest in rethinking history and questioning time.

Babette Mangolte (US citizen, born in France 1941) discovered Cinema in 1960 with the Nouvelle Vague. In 1964 she became one of the first women accepted by “L‘École Nationale de la Photographie et de la Cinématographie” founded by Louis Lumière. Her interest in experimental work led her to visit the U.S. and the New York film scene in 1970 where she discovered dance, performance, and theater and got involved in the Soho art scene of the early 70s. Asked about the films which influenced her the most she emphasizes Dziga Vertov’s Man with a Movie Camera (1929) and Michael Snow’s Wavelength (1967): “The two films literally changed my life. The first one made me decide to become a cinematographer and the desire to see the second one made me travel to New York, which became my home and where I later made my films.”

Babette Mangolte was the cinematographer for Chantal Akerman’s Jeanne Dielman (1975) and News From Home (1976), as well as for Yvonne Rainer’s Lives of Performers (1972) and Film about a Woman who... (1973). On her collaboration with Chantal Akerman she once said: “Being feminists in the 70s didn’t mean that we were claiming: ‘We are women! We are here!’. We wanted to say that the perspective of a woman cannot be the one of a man. As women we wanted to write other kind of stories than the ones that the young men of our generation were interested in, like the Nouvelle Vague filmmakers who were reworking buddy movies and crime stories from the Hollywood era in Parisian setting.”

In 1975 Mangolte completed What Maisie Knew, her first film, which received the „Prix de la Lumiere“ at the Toulon Film Festival in 1975. Other important films by Babette Mangolte are amongst others: The Camera: Je or La Camera: I (1977), The Cold Eye (1980), The Sky on Location (1982), Visible Cities (1991) and Four Pieces by Morris (1993). One of her most recent film is Seven Easy Pieces (2007) which documents Marina Abramović’s re-enactment of seminal works from the 1970s at the Guggenheim Museum in New York.

Babette Mangolte is also a published essayist, having written texts that examine her photographer’s practice documenting performance, and in addition has published on changing technologies.

Another part of the exhibition will be devoted to Mangolte’s installations and photographs. In the installations, she invents new ways “of looking at what it means to look” using specific modalities of displaying her works.

At the Kunsthalle Wien she will present a new version of Touching consisting of photographs selected from her archive of historic photographs of theatre and performance. It is an interactive piece that invites the viewer to touch and restructure the prints on a table, to compare different sizes of the same photograph and look at it depicted on contact sheets.

On the occasion of the opening of her exhibition “I = Eye” artist Babette Mangolte talked to curator Luca Lo Pinto about her work.

Artist: Babette Mangolte
(US born in France) is an experimental filmmaker and a photographer who is know internationally and lives in New York.

A publication was released in conjunction with the exhibition.
It reflects on her practice as a photographer and filmmaker and her collaborative work with filmmakers, artists, dancers, and choreographers. She provides insights into the techniques and methods she created as well as her relationships with notable collaborators such as Marina Abramović, Chantal Akerman, Trisha Brown, and Yvonne Rainer.