Camille Henrot
If Wishes Were Horses 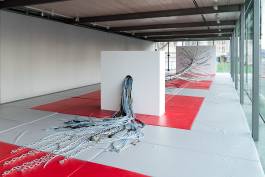 If Wishes Were Horses at Kunsthalle Wien is the first institutional presentation of Camille Henrot’s oeuvre in Austria and comprises an entirely new body of work produced for the occasion. The exhibition takes its name from the sixteenth century proverb “If wishes were horses, beggars would ride.” While the expression is typically associated with repressive desire, Henrot employs it to suggest how imagination, creativity and fantasy can offer hope and the possibility for change.

Henrot draws upon a broad range of epistemologies and anthropological research to unravel, fragment, and transform pictorial codes into rich registers of information and idiosyncratic material. The exhibition includes sculpture, installation and a film, which coalesce to consider the binary power structures of sadomasochism, ritual, authority and control, in order to reveal, through the artist’s distinct visual language, how these roles are both symbolic and reversible.

At the centre of the exhibition is an oversized braid sculpture, titled Tug of War. Comprised itself of braided elements–metal chains, ropes and rubber tubes– the sculpture plays with porous meaning, and draws upon the misnomer of the ‘French braid’, an ancient hairstyle originating from North Africa, which was later denominated in nineteenth century America as a signifier of elegance and sophistication. Where the ritual of hair braiding might be associated with the gesture of gentle care, in Tug of War, the strands of intertwined chains allude to repressive control, and the trajectory of oppression throughout history. The uniform composition of the braid, suspended above exercise mats within thegrid-like structure of the gallery, refers to the figure of the masochist, who operates within confined boundaries, and for whom a strict schema acts as a refuge from trauma.

Such regimes of dominance and subjugation are further explored in Henrot’s new film Tuesday, which interweaves footage of racehorses being groomed before and after training with scenes of Brazilian Jiu-Jitsu fighters interlocked in combat. In Brazilian Jiu-Jitsu, a martial art developed from Judo, which focuses on grappling and ground fighting, positions of dominance and weakness form a dynamic structure in which physical strength is not a decisive criterion. Power structures are translated into a sporting struggle with an open output, in which the roles of domination and submission are reversed from one moment to the next. Shot primarily in slow motion, the competitive nature of the Jiu-Jitsu fighters and racehorses is paralysed by an extreme aestheticisation, transforming scenes of action into objects of contemplation and visual pleasure.

This reversibility of roles is materialised in the sculptures Wait What and I Say. The interlocked forms of cast bronze and aluminium, wood, and leather depict anthropomorphic forms in states of tension and suspension. The arrested movement–one of the central themes of classical sculpture–is transformed into a compulsive calming of the free-moving individual subjected by an abstract authority. The titles of the works also suggest the power of words over action, echoing the operations of the masochist in contrast to the sadist counterpart.

The different elements that comprise the show unfold a choreography and comprehensive dialogue, drawing upon formal structures and raising questions that derive from Henrot’s greater investigation on the human propensity toward dependency.

Taking place during the Spring of 2017, the show in Vienna could be viewed as a prelude to Henrot’s eagerly anticipated “carte blanche” in the Fall of 2017 at the Palais de Tokyo in Paris.

This exhibition matches the wider artistic program of the Kunsthalle Wien where special attention is being paid to the practice of female artists. After the solo projects of Nathalie du Pasquier, Babette Mangolte, and Sarah Morris, Camille Henrot’s exhibition is another homage to an inspiring and influential female artistic position.

Artist: Camille Henrot
(born 1978) lives and works in Paris and New York. She recently has had one-person exhibitions at Fondazione Memmo, Rome (2016); Kunsthal Charlottenburg, Copenhagen (2015); Westfälischer Kunstverein, Münster (2015); New Museum, New York (2014); Chisenhale Gallery, London (2014), Schinkel Pavilion, Berlin (2014); and New Orleans Museum of Art (2013). She participated in the 2016 Berlin Biennale, the Biennale of Sydney and has previously been included in the Taipei and Gwangju Biennials as well as Prospect New Orleans. She is the recipient of the 2014 Nam June Paik Award and in 2013 won the Silver Lion prize for most promising young artist at the 55th Venice Biennale. In Autumn 2017 she will have a carte blanche across the entire Palais de Tokyo.

Special thanks to König Galerie, Berlin; kamel mennour, Paris/London; and Metro Pictures, New York for their support to the exhibition.