Ian Wallace
A Literature of Images 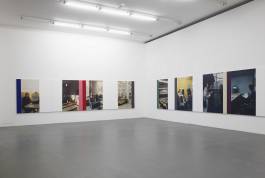 Ian Wallace is one of the main contributors, along with Jeff Wall, Rodney Graham and Ken Lum, to the development of conceptual art in Vancouver, an art scene which has drawn world-wide attention since the early 1970s. Wallace’s career began in the mid ’60s, when he took up a professorship at The University of British Columbia, where Jeff Wall were among his students. He continued to teach until the late ’90s whilst simultaneously developing his own artistic practice. He is an artist with a strong interest in avant-garde strategies and has developed a picture idiom that combines monochrome painting and documentary photography. Even though Wallace’s work is part of many North American museums and private collections, until now his practice has remained underexposed in Europe.

Instead of adopting the format of a chronological display, each institution will take a constellation of key works as a point of departure. Designed as a trilogy, the three institutions each present a unique exhibition thematically linked to a public program. At the Kunstverein für die Rheinlande und Westfalen, Düsseldorf, the twelve-part panorama Lookout (1979) will offer a focus for considerations of the construction of imagery. And in Kunsthalle Zürich, Attack on Literature (1975) will focus the inquiry on questioning poetics and the tensions between image and text.

In Witte de With, the photo-murals The Summerscript (1974), The Idea of the University (1990), Clayoquot Protest (1993) will be central next to the installation of At Work (2008), a suite of works including a video and photographs in which we see the artist questioning his own role. Together the three seminal works lay bare formal relations between avant-garde painting and photography, and test the communicative and ideological limits of art production. For example, The Summerscript shows images of an unfinished film, which was originally intended to be a collaboration between Ian Wallace, Rodney Graham and Jeff Wall. In Clayoquot Protest, the focus is on the individual artist’s role within a collective action. The photo/painting images are set against the background of Canadian wilderness that protestors are trying to protect from exploitation in 1993. The Idea of the University links art practice and the intellectual milieu.

Ian Wallace’s interest in the position of the art institution as a place for reflection and production of meaning is visible in the design of this intensive collaboration, initiated by Witte de With. The broadening of the international dialogue and the (art) historical depth that the project entails illustrates and emphasizes crucial aspects of Wallace’s art practice.

Artist: Ian Wallace
(born 1943, Shoreham, England) began to make art in 1965, and received his MA in Art History from the University of British Colombia (UBC) in 1968. Wallace taught at UBC from 1967 to 1970, and at the Emily Carr Institute of Art + Design from 1972 to his retirement in 1998. His prestigious exhibition career includes Canadian group and solo exhibitions at the Vancouver Art Gallery, and international group and solo exhibitions in Germany, Switzerland, Spain, Belgium, the Netherlands and the United Kingdom. He continues to be an influential artist, teacher and writer.

A Literature of Images

An extensive monograph was jointly produced, edited by the curators and Monika Szewzcyk at Witte de With in collaboration with Ian Wallace. The publication gives insights on Wallace’s practice accessible for a worldwide public. With contributions from Renske Janssen, Vanessa Joan Müller, Jacques Rancière, Dieter Roelstraete and Monika Szewzcyk. 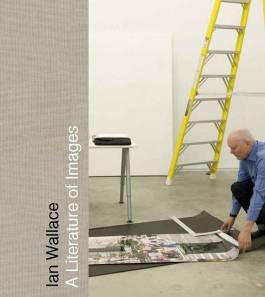