Act II: From Love to Legal 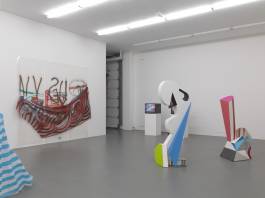 Act II: From Love to Legal brings together a selection of contemporary artworks that confront oppositions between anecdotal and factual, personal and historical, making it problematic to separate desire from even the most ascetic relationship to the world. Exploring references to biographical and factual histories, with Act II we want to suggest a cyclical trajectory that begins in private life – that space and time in which one “is not an image, an object” (Barthes), addressing the utopia of a time and a space in which one would be able to remain untouched by power, truth, and morality.

This Act opens with two works by Nedko Solakov, Agreement, and The Bill, two seemingly naïve and harmless statements that, as is common in Solakov’s work, set up a fictional space of intimate communi-cation between the visitors and the artist. Agreement announces to the visitor that by entering the gallery she or he is therefore liable to being harassed by the (absent) artist; The Bill tempts the visitor to take a 20€ banknote the artist has left lying with a message that presents an irresolvable cycle of moral and practical dilemmas should one chose to take it, or should one find that it has already been taken. The exhibition opens thus with a subtle reference to the series of fraught relationships between individuals and the social systems in which individuals unfold.