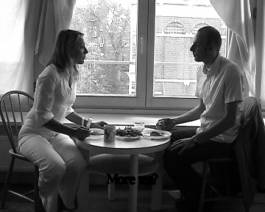 The Frankfurter Kunstverein presents the first major solo-exhibition of the young Israeli artist Keren Cytter (born 1977), who lives and works in Amsterdam. The presentation will include ten video works dating from the last four years, produced in Israel and Holland.

Cytters short films mingle documentary, fictional forms, and comments on the filmic form itself. They are experiments in ways of creating multi-layered forms of story telling that deconstruct and transpose narrative conventions and clichés, to make the films balance on a line between the funny, the grotesque and the tragic.

Most of the films are built upon a simple narrative structure – a dialogue, an event, etc., mostly written around documentary material, such as her or her friends’ lives. The result is a synthesis of fact and fiction, of the authentic story-skeleton with various quotes and clichés from popular culture, film, pop songs, trash literature, played out in dramatic forms from melodrama to documentary – sometimes at the same time.

The filmic layers are connoted in various ways. The film The Milkman, for example, is split up into different layers of dialogues conducted in two languages. A young man wants to commit suicide, and has an internal dialogue with important persons from his life, his mother, his ex-girlfriend, etc. Parallel to this is a narrative, which deals with the filmic form itself, where the making of the film is discussed, and the camera as an object becomes a part of the storyline.

In Cytters works a new way of telling the story is set up, where the identities of the characters and of the story become muddled. The artificiality of the language and the style, overloaded with clichés and conventions, blended with the apparently documentary, “home-video” style, make some of the films into grotesques on the human relations and feelings portrayed, (friendship, love, sex) and of the characters.