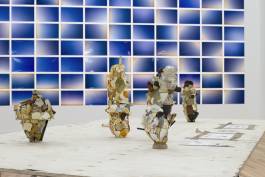 Edgar Leciejewski spent six months as an FIA artist-in-residence in 2014. Tones brings together new work stemming from his time on the island, including large-scale collages, photographs of natural elements, and precarious sculptures composed of objects found on the shore. Taken together the works in the exhibition are a collection and an archive of time shown in modern images, raising questions on how we contemplate ideas of nature.

“A photograph says nothing about the past. Rather, it creates an infinite abundance of speculations within us about the circumstances that have lead to the photograph.” (Edgar Leciejewski)

Fettgerüst (2014-15) features 169 colour photographs installed in a grid that occupies an entire double-height wall of the gallery. Each image depicts a Fogo Island sunset, creating a monumental wall of fragments of the sky, yet none serve to capture the immensity and experience of the real natural phenomenon. Devoid of a frame of reference or identifying context, Fettgerüst offers a structured gaze over an infinitely repeating experience.

Just as any photograph is an intentional framing of one view over another, allowing the photographer to construct a form of reality, so too its interpretation is influenced by the viewer’s subjective experience and knowledge. Rough Form (2014) is a series of 32 photographic collages depicting rock formations on Fogo Island, eight of which are presented in the exhibition. Each collage superimposes a black and white print onto an inverted colour print of the same image. The resulting composite images are bereft of scale, and evoke a desire to see within each rock formation some recognizable form or pattern, to impose a human reading upon the natural world.

The large-scale colour photograph A Scene in a Library (2014) depicts a bookshelf replete with bound manuscripts, stacked papers, artefacts and mementoes. Yet what appears as a deeply personal collection is in fact a staged, artificial arrangement: a composite image sewn together from multiple analogue and digital sources. Objects within the image offer clues to be deciphered, such as references to the birth of photography and the nature of seeing, raising questions on perception as a cognitive act.

Lastly, Leciejewski’s Rockets (2014-15) are three-dimensional forms assembled from pieces of broken glass and crockery found on the shores of Fogo Island. As sculptures, the Rockets at once evoke social and material histories of island communities read through 150-year old shards, while taking on a new identity as constructed objects with possible futures.

Tones draws together multiple interpretations of natural elements, where the physical act of seeing is simultaneously a construction of reality, a making of the world.

Artist: Edgar Leciejewski
Based in Leipzig, Edgar Leciejewski explores the various social and scientific uses of photography, employing an experimental, analytic approach to the medium by using various techniques and media. His work investigates such issues as the rhetoric of the photographic series, genre, composition, and the question of how much time can fit within a single photographic image. Leciejewski’s photographs are repositories of time that allow for a slowing down of the act of seeing. His work has been presented at Witte de With Center for Contemporary Art, Rotterdam, Schirn Kunsthalle, Frankfurt, Kunsthalle Wien, and Museum der bildenden Künste Leipzig, among others.

The publication accompanies the exhibition, co-published by Fogo Island Arts and Sternberg Press (Berlin) and including texts by Bill Arning and Zoë Gray. 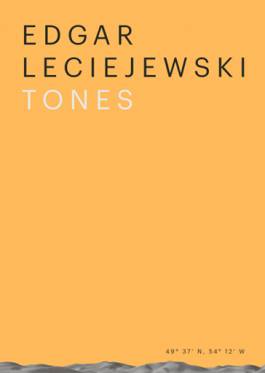 The foregoing texts and images are provided and copyrighted by: https://www.fogoislandarts.ca/news/exhibitions/edgar-leciejewski-tones/