Digital Assembly
History is not the Past

The centerpiece of the Digital Assembly program in June 2020 was a podcast series titled History is not the Past, which offers thoughts and discussions about present-day issues and future scenarios at the intersection of history, society, and culture.

As we look to shape society for the future, it is crucial to bear the past in mind, that without remembering, we will lose our future. The podcast series is mostly in German with some contributions in English.

The podcast series was released daily from June 18 to 28, with 11 episodes in all covering a broad range of topics with music by Dota Kehr, Michaela Meise and Maya Shenfeld.

Listen to the full podcast

Episode 2: New York Times journalistRoger Cohen and Mirjam Zadoff will offer a global look at the shift in political discourse as a result of populism, emotional mobilization, and interconnectivity among right-wing extremist movements, but also at new forms of solidarity, grief, and trauma, and the chance to build transnational, collective memories.

Episode 3 (in German): A critical historical look at the documenta event and the resulting institutional responsibility for the documenta Institute that is currently under development is the focus of the discussion between Nora Sternfeld and Christian Fuhrmeister. In the second contribution Christiane Wolf introduces the former Nazi “Gauforum” site in Weimar and the area’s redesign as a cultural and memorial site. A reading from letters designed by Martin Valdés-Stauber commemorates Munich victims of the Nazi “euthanasia” murders.

Episode 4 (in German): The extent to which history and remembrance are inscribed on the built environment is the topic of the discussion by Stephan Trüby and Paul Moritz Rabe, who thconsider “right-wing spaces” and the former forced labor camp at Neuaubing.

Episode 5 (in German): Dialogue and responsibility between different generations plays an important role in the discussion between Luisa Neubauer and Doron Rabinovici, who talk about the future of democracy and engagement within civil society from the perspective of their personal experiences.

Episode 6 (in German): Digital life and virtual networking plays a role in two conversations, one between Georg Diez and Nicolaus Schafhausen and the other between Sahana Udupa and Florian Hartleb. Diez advocates a democratic digital civil society where technological means open up new paths toward autonomy and co-determination. Udupa and Hartleb, for their part, examine the threats posed by radicalization on the Internet and the online dissemination of right-wing extremist thinking.

Episode 7 (in German):Armin Nassehi evaluates with Christine Hamel present-day social transformations and the political potential of alliances throughout society. Leon Kahane and Fabian Bechtle devote their contribution, Forum on Democratic Culture and Contemporary Art, to issues of aspirational identity in the present-day understanding of culture while calling for a critical review of cultural codes.

Episode8 (in German): The two artists of Tell me about yesterday tomorrow,, Michaela Melián and Willem de Rooij, talk to Lukas Graf about their artistic approach to past, present and remembrance. Lena Gorelik reads from her text Ich habe Angst.

Episode 9: Art in the public sphere is the topic of Ken Lum's and Paul Farber's conversation, which serves, in the context of their monument lab in Philadelphia, as the starting point for examining and collectively shaping societal representation.

Episode 10 (in German): Links between anti-Semitism and racism and the possibility of building an inclusive culture of thought take center stage in the discussion among Charlotte Wiedemann, Stefanie Schüler-Springorum, and Sonja Zekri. Interdisciplinary cooperation and the dialogue between the arts and scholarship are key aspects of curatorial practice for Clémentine Deliss, whose contribution is dedicated to exhibition and research projects in the context of post-social and cultural anthropology collections.

Episode 11 (in German): Max Czollek and Michael Brenner discuss with Mirjam historical and current notions of solidarity and the integrative power of narratives that embrace multiple perspectives.

Tell me about yesterday tomorrow

The podcast series takes place in the context of the exhibition Tell me about yesterday tomorrow. 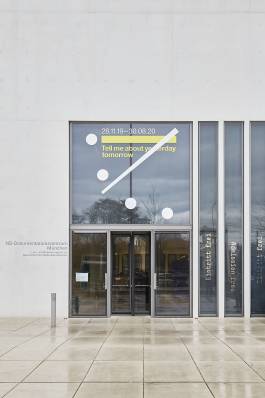 The foregoing texts and images are provided and copyrighted by: https://yesterdaytomorrow.nsdoku.de/history-is-not-the-past