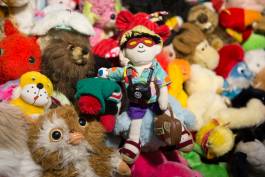 Charlemagne Palestine is a Gesamtkünstler. For 40 years he has acted as a musician, composer, performer, visual artist and as such he has been able to question the frames and rules of any medium and language he employs. Avoiding existing definitions is a central point of Charlemagne’s practice as well as that of other artists of his generation like Tony Conrad, Jack Smith or Stuart Sherman. Any attempt to place him within the limits of a given category would thus be like trying to catch hold of a fish with one’s hands.

The exhibition at Kunsthalle Wien aimed at depicting this schizophrenic practice by embracing all tentacles of this wild octopus and offering a unique portrait of the wide-ranging and complex work of Charlemagne Palestine. It stood in line with other recent exhibitions at Kunsthalle Wien that focus on cross-genre artists – like Tony Conrad, who had a solo show that spring, or Florian Hecker, whose major solo show followed in 2016.

The exhibition included his early video works, his stuffed animal sculptures, paintings, installations, and book scores alongside other works that have rarely been shown before: an exhibition conceived as a Gesamtkunstwerk, as the title suggests. One of the core pieces of any Palestine exhibition is a piano – a Bösendorfer Imperial – fully covered with stuffed animals; the fetish objects that accompany the artist everywhere he goes. GesammttkkunnsttMeshuggahhLaandtttt is a title that links the art nouveau concept of “Gesamtkunst” and the yiddish “meshugga”, which stands for craziness.

Born in New York from Eastern European immigrant Jewish parents, Palestine started to perform as a teenager when he played the bells at St. Thomas Church next to the Museum of Modern Art. He developed his personal cosmology by listening to the ethno music released by Moses Asch’s Folkways Records as well as Debussy, Stravinsky, Xenakis, Stockhausen, and Pran Nath. Charlemagne’s world can perhaps be viewed as an incestuous affair with dada, futurism, and fluxus filtered through rituals of indigenous people. Since the end of the 1960’s he has executed and performed many provocative, unusual, evocative works and happenings. In his early years, he collaborated with choreographer Simone Forti and artists Tony Conrad and Richard Serra, and performed alongside avant-garde artist La Monte Young, and the composers Terry Riley, Philip Glass and Steve Reich. Nevertheless, Palestine always resisted being labelled as a minimalist, opting instead for the term “maximalist.” In the 1970’s he produced a seminal body of videos consisting of performances made with and for the camera. In these video works, the artist creates an outward articulation of his own internal state of mind by chanting hypnotically, running hysterically, worshipping teddy bears, and drinking cognac. After years of these intense ritualistic, shamanistic music compositions and performances, his desire to develop visual works started to overshadow his concerns for music. The body of works he produced in the following three decades is therefore marked by the use of stuffed animals that are regarded as shamanic totems and inhabit his paintings, sculptures and installations.

Charlemagne is in some way a “prehistoric” artist, if we define prehistoric as a time with no division of gender, no categories, no barriers, where all things are still interconnected. As a truly “in”-disciplinary artist he makes it difficult for art history to categorize him. GesammttkkunnsttMeshuggahhLaandtttt showed for the very first time how everything is connected in his comprehensive body of work.

Conversations and Concerts accompanying the exhibition can be viewed online.