Jesper Just’s first solo exhibition in the Netherlands, at Witte de With, Center for Contemporary Art, Rotterdam. Comprising of two major new films and a selection of his previous work. In conjunction with this joint exhibition project, WdW Publishers, the Ursula Blickle Foundation and S.M.A.K. were co-publishing the first major publication of Just’s work.

Jesper Just, who works mainly in film, represents one of the most interesting and pressing artistic positions in moving image production today. His works are extremely multi-faceted, in fact so layered and complex that the more one tries to understand or analyse them, the more obscure they become. The harder one tries to read the behaviour of Just’s protagonists and the relationships between them, the deeper one stumbles into psychological traps, graciously and generously positioned by the artist to manoeuvre the viewer into an isolated state of seduction. Nothing is quite like watching one of Just’s films for the first time. The viewer is caught off guard, in a state where reason is not ‘loaded’ to fight off love, longing, hurt, and deep existential fear. As a result, one is swamped by one’s own raw, emotional, and subconscious reactions.

Works such as Invitation to Love (2003), A Fine Romance (2004) or The Lonely Villa (2004) are often referred to as being “homoerotic” or addressing eroticised father-son relationships. This may indeed spring to mind, considering that the majority of Just’s casts are male and that the men do interact with one another in a highly charged fashion. However, Just has stated that he does not seek to create narratives that must be ‘read’ or ‘understood’ in any particular way. Rather, the works should be regarded as incessantly shifting parts in Just’s larger socio-political enquiry into the nature of human interaction and relationships: their pitfalls, failures and perversions, but also their dignity and beauty. The film that Just is producing on the occasion of this exhibition showed the complexity of his observations in a different and perhaps unexpected way…

The new film is co-produced by Witte de With, the Ursula Blickle Foundation and S.M.A.K. and supported by the Danish Arts Council.

The exhibition was running simultaneously at Witte de With and the Ursula Blickle Foundation in Kraichtal, Germany. A selection of Just’s films were also screened in the ursula blickle videolounge at the Kunsthalle Wien, Vienna during the month of April. And Just’s works were on show at S.M.A.K in Ghent, Belgium, from April to June.

With special thanks to the Ursula Blickle Foundation and S.M.A.K.

This publication appeared on the occasion of the exhibition Jesper Just at Witte de With, Rotterdam and Ursula Blickle Foundation, Kraichtaland and a screening at the Ursula Blickle Videolounge, Kunsthalle Wien, Vienna. 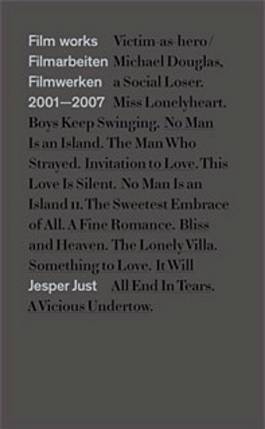