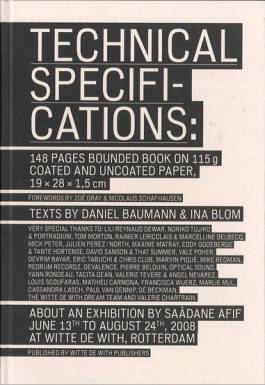 The exhibition Technical Specifications at Witte de With (13 June – 24 August 2008) represented an implosion and explosion of Saâdane Afif’s practice, as he simultaneously reduced his own works to the sum of their parts and opened them up to other readings, other formats, other artists and other audiences beyond the institution’s walls.

This eponymous book captures that moment of implosion/explosion, documenting the visual appearance of the exhibition itself and the content of the radio show 53’56” & Some Words…, which was broadcast on 107.5FM for the duration of the show, and which is now streamed online: www.technicalspecifications.net.

Embodying Afif’s protean practice and formalizing some of the many relationships that his works establish, the book comprises many separate but related parts, each designed to reveal another aspect of this prism-like project. Structured almost as a Russian doll, the book-within-a-book, Lyrics: Process, reveals how Afif’s earlier works form the core of his more recent practice. All of the CDs that Afif has released to date are catalogued, documenting Afif’s entire delegation process to its end.

The two writers whom we invited to respond to this exhibition have evoked the way in which Afif’s practice is reminiscent of a hall of mirrors: self-reflexive to the point of Narcissism, whilst at the same time exemplary of an openness and intellectual generosity that is rarely seen in contemporary art.

In his essay that tracks the development of Afif’s modus operandi over the past five years, Daniel Baumann asserts that Afif ‘is not primarily concerned with occupying or asserting positions, but rather in creating platforms and perpetually exposing his method to scrutiny, comparable to an Open Source Project so that everyone can participate in order to develop the program further’. Baumann recognizes that, nonetheless, Afif’s work is ‘not the product of an anonymous community, but on the contrary has been precisely staged and directed by him’.

For her essay, Ina Blom draws upon her own extensive knowledge of sound to evoke a different type of mirror present in Afif’s work, reading the whole exhibition project ‘as an acoustic mirror of sorts, related, if only metaphorically, to a genre of devices that were part of early 20th century wartime technology’. In her analysis, in Technical Specifications ‘the acoustic mirror could be seen to reflect – or more precisely detect – art’s collectivist imagination or fantasies’.

The foregoing texts and images are provided and copyrighted by: https://www.fkawdw.nl/en