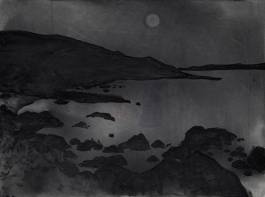 Questions of Travel presents parallel exhibitions by the artist in two decidedly different locations: at the Kunsthalle Wien’s Karlsplatz pavilion in the center of Vienna and on Fogo Island off the coast of Newfoundland in Canada. For these exhibitions Otto-Knapp, a German native now based in Los Angeles, selects a group of paintings from the past three years. The artist makes her black and white monochromes by applying watercolour to primed canvas.

Otto-Knapp combines motifs of landscape and decorative painting with a distinctive technique of layered and erased coats of paint to create works that are called by the LA Times as “visually elusive as quicksilver.”

In the exhibition Questions of Travel (Wien), Otto-Knapp’s paintings are placed alongside drawings by Swedish artist Carl Fredrik Hill (1849–1911), who organised his works as a scenography of expressive self-interrogation

Artists:
Silke Otto-Knapp
(born 1970) studied Cultural Studies at the University of Hildesheim and graduated from Chelsea College of Art and Design, London. She teaches at the Academy of Fine Arts Vienna and since the start of 2014 has lived and worked in Los Angeles, where she teaches at UCLA. Her solo exhibitions include: UC Berkeley Art Museum and Pacific Film Archive (2011); Kunstverein München, Munich (2010) and Tate Britain, London (2005).

Carl Fredrik Hill
(1849–1911) studied painting at the Stockholm Academy of Arts and continued his studies in France, where he lived and worked for several years. A large part of his legacy is contained in the archive of Malmö Art Museum, Sweden. Solo exhibitions include: 777, Bawag Contemporary, Vienna (2003), Carl Fredrik Hill. Hill Hill Hill Hill Hill, Kunsthal Charlottenborg, Copenhagen (2013).

Published on the occasion of the exhibition is the catalogue Questions of Travel (2014), a co-production of Fogo Island Arts, Kunsthalle Wien and Sternberg Press. The book features essays by Vanessa Joan Müller and Susan Morgan and Silke Otto-Knapp interviewed by Nicolaus Schafhausen.

The foregoing texts and images are provided and copyrighted by: https://www.fogoislandarts.ca/news/exhibitions/silke-otto-knapp-questions-travel/