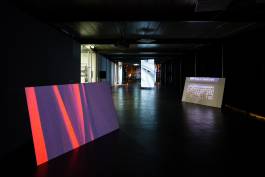 Images that reflect something of our surrounding reality tell and create stories in the minds of their recipients. However, what of these images is based on real materials or events? What is fictitious, manipulated or produced by algorithms? What mechanisms hide behind images and their production today?
In Everything a Hand Can’t Take, Marlene Maier and Olena Newkryta use different approaches to make aspects of picture production visible that generally elude the viewer’s perception. In their media installations, both artists blend documentation, fiction and reality, at the same time putting social interactions into a form that can be “grasped”.

In her 3-channel video installation Food only exists on pictures, Marlene Maier addresses the possibilities offered by different modes of living and working – ranging from complete transparency to the disappearance of the individual in the anonymity of virtual as well as real spaces. Drawing on three fictitious figures who nonetheless stem from documentary sources, Marlene Maier creates a blurry multidimensional space, where absence and presence, concrete and indifferent elements simultaneously intersect. For all three “narratives,” she uses different types of cinematic material – such as assemblages made from video-stock footage or re-productions of existing photo material or even the reduction of images to close-up shots on a video screen. Last but not least, Marlene Maier is interested in finding an aesthetic “language” for the mechanisms we don’t have access to, the mechanisms that emerge from the opaque fusion of technological, economical, and techno-political interests.

With her multimedia installation folding unfolding refolding, Olena Newkryta creates various possibilities for simultaneously perceiving visual and haptic sensations. First of all, the fabric panels are mechanically stitched in a process which can be seen (and heard) on the three canvases that serve as projection surfaces for the three videos. Since they can be experienced both materially and haptically, these vehicles of representation interact with their virtual copies and their pre-existing models in a relationship of interdependence. By contrast, her static C print entitled to grasp. carnal thoughts is based “solely” on material represented in terms of its media-produced image, namely her own crumpled bed linen that was copied piece by piece with a handheld scanner and combined anew to create a collage-like picture. Sometimes serving as a motif, the “fold” also plays a philosophical-metaphorical role – in the sense of Gilles Deleuze, as marking the difference between mind and body and, at the same time, standing for an alternative way of thinking that opposes the linearity of logical reasoning.

The works of Marlene Maier and Olena Newkryta share conceptual proximity, which led to close collaboration between the two artists as they prepared for the exhibition and also gave rise to their joint exhibition title as well as its poster motif. Having met for the first time during the award preparations for the Kunsthalle Wien Prize, both of these artists exemplify the kind of productive cooperation that has been practiced by the participating art institutions for the past 15 years: A cooperative spirit between the artists who make art and the intermediaries who support art is exactly what the art world needs to share exceptional artistic ideas to society. In this regard, the Kunsthalle Wien Prize is intended as a platform for the recognition of young artistic achievements that are relevant to us and also for productive encounters between art institutions and those who make art.

Marlene Maier
(born in 1989 in Steyr, Austria, lives and works in Vienna) graduated from Vienna’s Academy of Fine Arts in 2017. She majored in art and digital media under the direction of Professor Constanze Ruhm. Exhibitions and screenings include: mumok cinema, Vienna; Institut français du Japon, Kansai (JP); Kasseler Dokfest (G).

Marlene Maier and Olena Newkryta were awarded the Kunsthalle Wien Prize 2017 for their theses. The exhibition is based on these theses.

Publication: The exhibition is accompanied by two catalogues featuring texts by the editors and jury members, discussions with the artists as well as illustrations. The catalogues are published by Sternberg Press, Berlin.